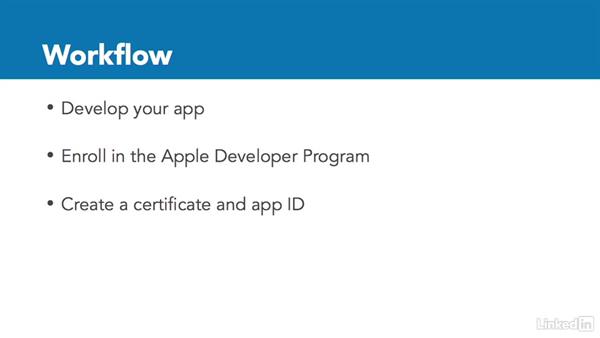 The iOS app publishing workflow is a fairly straightforward process, but there are a lot of steps to it. This movie demystifies all the steps and shows you how to get your apps into the App Store.

- [Narrator] Let's talk about the workflow…of actually getting an app into the App Store.…First of course you want to develop your application.…If you're not ready to submit to the App Store…or you're not ready to have other…users test your application, there's no need to pay…any money to be a developer.…Once you're ready for that point,…you enroll in Apple's Developer Program…which at this point is 99 US dollars per year.…Once you've enrolled in the program,…you need to create a developer or publishing certificate…and an app ID for your application.…