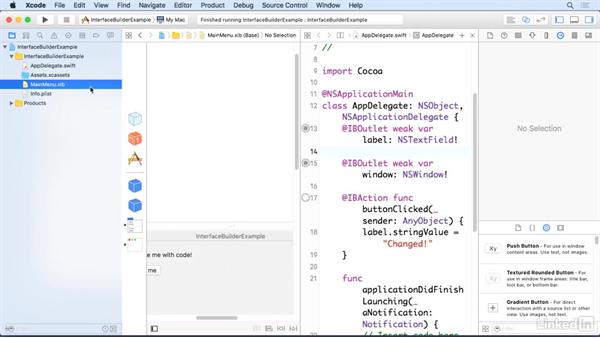 Sometimes when working with UI objects the connection between the object and your code will be wrong, or it will break. This video shows how to troubleshoot broken connections to get your apps working again.

- [Instructor] Sometimes when you test your application…you feel like you did everything right…and it just doesn't work.…For example, if I click Click me right here,…the label doesn't change.…If I close the application and return to Xcode…and I look at my code everything is actually…right in my code it's just like it was…in the previous movie.…So how do we troubleshoot when something is wrong…with our user interface objects?…One of the first ways that we can check that…is by looking at these circles…to the left of our line numbers.…

Notice that the label and window circles are filled in,…but the button clicked action is not filled in.…These circles appear…when you have the @IBOutlet…or IBAction call outs in your code.…These of course mean this variable…or property is an interface builder outlet…and the same for actions.…When we declare a method as an IBAction…with this call out it's saying this is an action…that's available to interface builder…to connect to a user interface object.…

So by having those call outs…we automatically get this outer circle.…