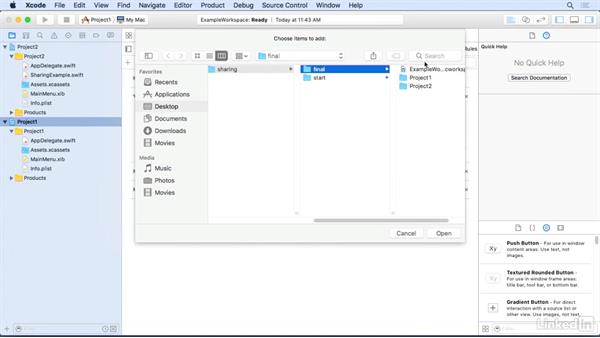 Workspaces, and even outside projects for that matter, can share code files. In sharing, you have the option to copy the file(s) or to link them. This video shows how the entire process works.

- [Instructor] Let's say I want to share a file…between workspaces.…So, I'm here in Project2 in my workspace,…and I want to create a new class.…So, I'll go to File, New, File,…and then under macOS I'll choose Cocoa Class and hit Next.…This could be a subclass of NSObject, Language: Swift,…and I'll call this SharingExample.…I'll hit Next, I'll add it to Project2,…and hit Create.…There's our SharingExample class.…

In here, I'll simply create a global variable…called testGlobal, and this is going to be a string.…Set it equal to any value you want.…So, let's say we make this class,…and we want to use this class in another project.…We want to share it,…but we don't want to alter it and make a copy.…We want to use the same file,…so any edits we make should apply to both the original…and the version that's in the other project.…

To do that, you can select your other project.…So, SharingExample is in Project2.…We want to use it in Project1.…If we go to AppDelegate.swift in Project1…and we try to reference our test global,…