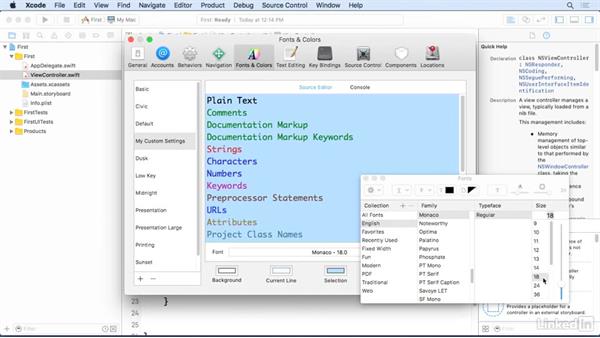 Sometimes when working in a coding environment, the default font settings are not what you're used to, or insufficient for your needs. In this video, see how to customize the font settings and text presentation settings of Xcode.

- [Instructor] You may have noticed…that on my screen the fonts…and the line numbers don't exactly match yours.…To change your font and your line number settings…you can go to Xcode Preferences.…From here you can head over to the Fonts & Colors tab…you could see that I have Todd's Settings selected…but if you want to create your own custom settings…and modify how your fonts look…you can do that by selecting the Default settings…hit the plus button to duplicate default.…

And then you can name this whatever you would like…My Custom Settings for example.…When you have your settings selected…you could then modify the Fonts & Colors…in the right side of this menu.…For example you could select Plain Text…and then change the font of it by clicking the T button.…I'm going to close this out because usually…you don't want to change the font…or size of one object at a time…unless you're simply changing the color…which you can do with this color swatch here.…