Send an app to Apple 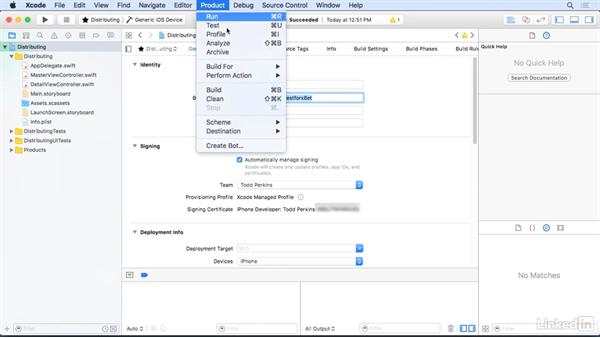 Once your app is done and ready to get into the hands of users, either testers or end users, it's time to send the app to Apple for review. This video shows how to get your app to Apple straight through Xcode 8.

- [Instructor] When you've done everything…in Apple's Developer Portal and iTunes Connect…and installed your certificate,…you're ready to send your application to Apple.…In the Project Navigator, select your project name…and then go to the General tab.…In the signing section, make sure to check the box…to automatically manage signing.…From there, choose your development team.…If you don't have a development team already,…click the button to add an account.…It'll be then asked to add in…your Apple Developer username and password.…

Log in and you should see your developer name here.…You should then see Xcode Managed Profile…for Provisioning Profile,…and then you should see your Signing Certificate.…You also need to make sure that your Bundle Identifier here…matches the identifier that you set up…when you set up your App ID.…It needs to match exactly or else it won't work.…And then, assuming you're leasing an iOS application,…you want to make sure that you change your scheme…so that instead of testing on a simulator,…

Video: Send an app to Apple