Prototype in a playground 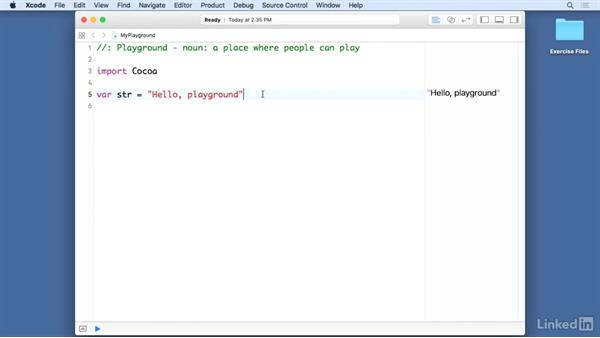 Playgrounds are meant for prototyping, and are an excellent resource for figuring out things like mathematical equations and algorithms with minimal clutter. See how playgrounds work in this movie.

- [Narrator] Let's say you have an idea.…An idea involving a mathematical equation,…and you're going to need to be able to…build and run this over and over and over again…to make sure you got the math just right.…Playgrounds are a perfect place…to test out that type of logic.…I've mentioned earlier that playgrounds are for prototyping,…so let's look at how they work.…From the welcome screen you can click to…get started with a playground,…or you can go to File, New, Playground,…or of course use the keyboard shortcut…option, shift, command, n.…

So let's create a playground,…and I'm going to leave the default name of MyPlayground.…I'll choose macOS for the platform,…and then I'm going to go to Next,…and I'm just going to save this…in Exercise Files, Chapter 02, playgrounds,…and then I'll create a new folder in there called final.…Now of course, if you're following along,…don't save it inside the final folder,…just outside right here is fine.…So I'll hit Create, and here's my playground.…

Now it doesn't look that interesting,…

Video: Prototype in a playground