Prepare an app to be published 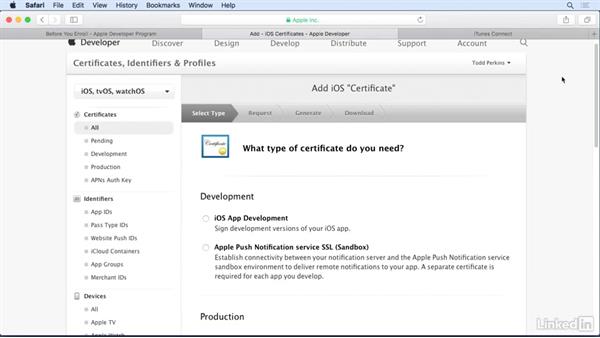 Before you can publish an app to the app store, you need to setup some initial certificates and application identifiers. This video shows how to go through that process.

- [Instructor] So let's say you're ready…to get your application in the hands of other users,…either to test your application or to release it…in the App Store.…And of course this applies for all of the app stores…that Apple has control over.…The first step is to enroll in a developer program.…From Apple's Developer website, select the program…that's right for you and click the button…to Start Your Enrollment.…You're going to have to go through a number…of steps providing a bunch of information to Apple,…pay the enrollment fee, and then usually…you'll have to wait.…

If you're enrolling as an individual…rather than an organization, you'll likely have…to wait for less time.…Once you've done that and all of your enrollment's set up,…you need to go to your Apple Developer account page.…From here, you need to create a certificate…so you can click the link to go…to Certificates, Identifiers & Profiles.…Go to Certificates, hit all, hit the plus button,…and follow the instructions to create a certificate.…If you're going to distribute to users,…

Video: Prepare an app to be published