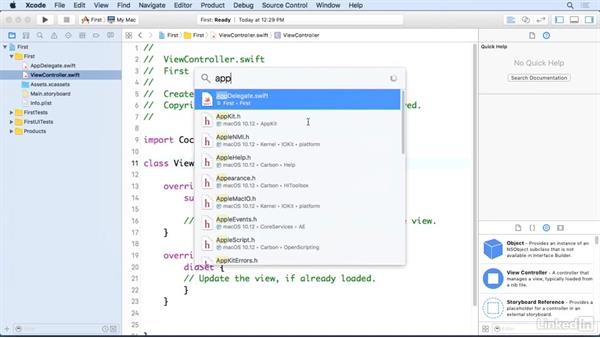 Opening files quickly can save plenty of time when you're developing applications. In this video, see how you can open a file by pressing a simple keyboard shortcut and typing out the first few letters of the file's name.

- [Instructor] So let's say you have a large project…with a lot of files, and you want to navigate…to a specific file quickly.…You know the name of the file,…but you don't want to drill down through the hierarchy…and in the Project Navigator.…You can use a keyboard shortcut, shift + command + o…or go to File, Open Quickly to do so.…When the Open Quickly menu pops up,…simply begin typing the name of your file.…Well, let's say I want to go to AppDelegate.swift.…

I type app, and boom, AppDelegate.swift is highlighted.…I press the return key,…and I'm right in there in the Editor.…Lets say I want to go to Main.storyboard,…another file in my project.…Shift + command + o opens the Open Quickly menu.…Start typing the word main.…It's highlighted, I press return,…and I'm in the appropriate file.…Now, when we have three files,…this obviously isn't incredibly effective,…but imagine if you had 100 class files.…

You know which file you want to edit.…You just want to get right to it.…Shift + command + o, type the name of the file,…