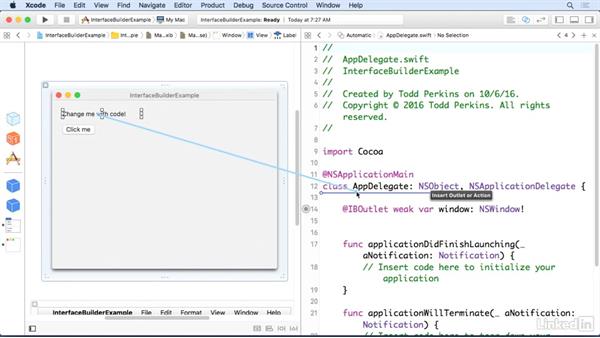 In order to respond to events or change UI objects at runtime, you'll need to make code connections. This movie shows how to connect those user interface elements to code using the assistant editor.

- [Instructor] Now let's look at building a simple interface…and connecting those user interface objects to code.…I'm here in my zip file Interface Builder,…and what I want to access is my main window…for my application.…So to do that, I'm going to click on the left side…of the screen in Interface Builder on my window.…That's going to take me right to my window right here…so I can start building my user interface.…So let's get a push button,…so I'll just click and drag one out.…And then a label, in the object library you can quickly…find objects, since there are so many of them,…by filtering.…

Click in the filter field and start typing the object…that you're looking for.…In this case, a label.…Xcode instantly shows you any user interface item…with the word label inside of it,…so we get both label and wrapping label or…multi-line label.…From there, simply click and drag out…the label that you want to use,…and then to clear the field you can always just hit…that x button right there, and we're back to normal.…So I'm just going to arrange these a little bit.…