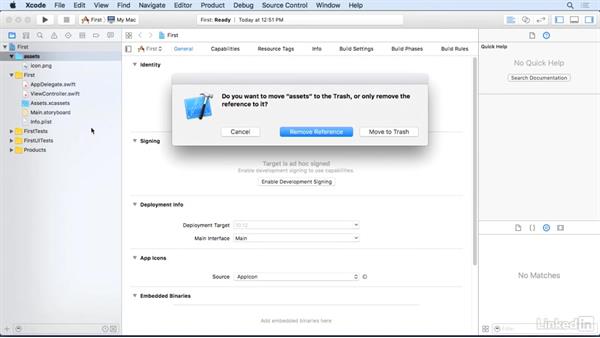 Often when developing an app, you'll need an outside resource like an image file or a text or code file. This movie shows how to get those assets into Xcode, both as folder references and as groups.

And of course there's a keyboard shortcut,…option command A.…So we can do that.…Navigate to the desktop.…Go to the assets folder,…and we can actually import the file by itself,…or the folder.…And I'm going to import the folder…because it adds another option.…And that's important and I want to talk about that.…So folder selected, click add,…and when I add that,…the folder is blue.…And that is different from these yellow…folders that we have already.…

I mentioned earlier,…that Xcode does not match your file system.…The blue folder icon is called a folder reference.…