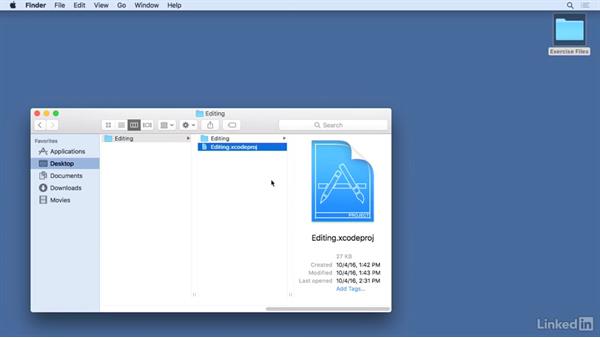 - [Instructor] The exercise files for this course are organized by chapters. In addition to the chapters folders there is also a folder called assets that contains graphic file. For each movie where we have a starting state of the exercise files, you're going to see the name of the file to open on your screen. It's going to look something like this. It will say, for example, chapter two, snippets, start, editing, editing.xcodeproject.

So you're going to see that whole path on your screen, from there simply double-click the Xcode project file to get right into Xcode working in the same file that I'm working in, in that movie. In addition to that I've also included the final states of many projects just for your convenience. For those of you who don't have the exercise files don't worry, you can still follow along. Aside from that icon file I showed you a second ago, we are going to stick to the basic assets built into Xcode.

We're also going to use projects created from scratch for the most part, and any exception to that, I'll make sure to point out so you can follow along as well.