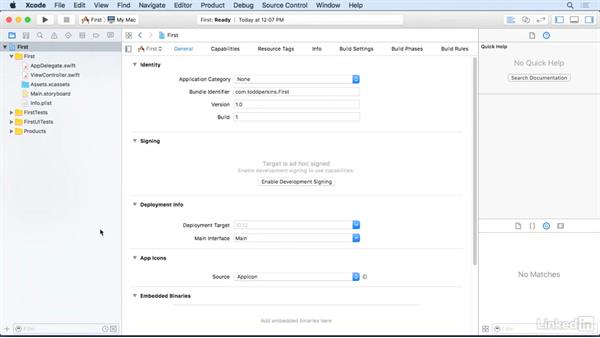 Xcode's user interface can be intimidating at first. This video attempts to demystify Xcode's many sections and buttons to help you navigate around the IDE effectively.

- [Teacher] The Xcode interface…can be pretty intimidating.…There are a lot of sections of it,…and there are a lot of buttons to click on,…and the interface adapts depending on…what you have selected.…So let's go over how this interface…is organized to make more sense of it.…At the top of the screen, you have the toolbar.…Toolbar is for running applications.…So we have these buttons on the left.…The play button to run your app,…stop button to stop your app.…These buttons right here enable you…to test on different schemes.…

Now for right now, what we're doing,…we don't need to change the scheme,…but if you're going to test for an iOS app,…you might want to run it in different…versions of the simulator or run it on your own device.…You change that right here.…The center of the toolbar has information…about your last or current build.…The first three buttons on the right of the toolbar…enable you to change the editor.…The editor is this big center area…of your screen in Xcode,…the main working area.…Normally, you're going to be using the standard editor.…