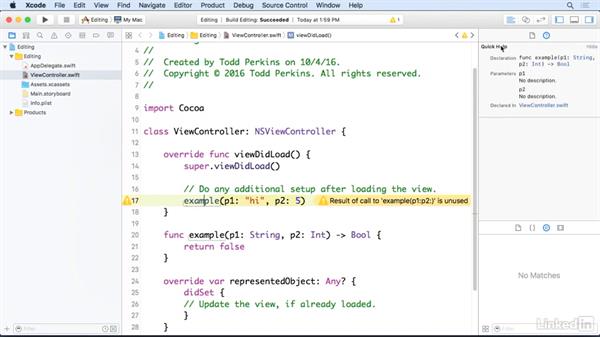 Xcode 8 has fantastic code completion tools- both for built-in frameworks and your own custom code. This video shows how to use Xcode's code completion and how to add quick help features to your code.

- [Instructor] Xcode's code completion…is almost always fantastic.…So, here I am in ViewControler.swift…and underneath this comment…inside of the viewDidLoad method,…which starts on line 13,…I am going to call an existing method.…So, I'm going to type view,…that's the name of an object inside of ViewController class…and I'm going to type a dot.…And this is going to list properties and methods…that are associated with my view.…

I can navigate this menu…by using the scroll bar on the right…or the up and down arrow keys on my keyboard.…I can also start typing out the name of a method…and then it instantly goes to that method name.…So I typed in sh,…and then everything that starts with and s and an h…or even has an sh in it,…even if it's not at the beginning,…is shown here.…So I can cycle through this filtered list…of properties and methods.…We see the return data types on the left…or the property types.…