Explore change history and use the version editor 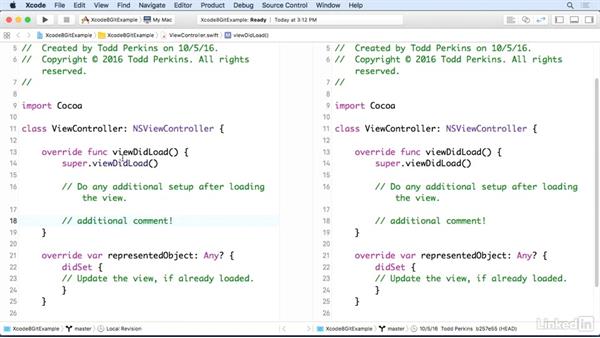 The history panel and version editor allow you to see commits you've made to your repositories right in Xcode. See how to access these tools in this video.

- [Instructor] So, my project here is the same project…I've used since the beginning of the chapter,…which you'll need to do if you want the version control…to work in the same way as you're going to see right now.…When you're working with version control, you can actually…look at the history of your changes right in Xcode.…If I go to Source Control, History, I can see the history…of my changes to my repositories,…this includes a time stamp,…as well as the comment that you added…when you committed the change to the repository.…

I'll click Done, close that, and I want to show you the…version control editor.…We looked at it briefly at the beginning of this course,…but if you hide the utilities and the navigator areas,…you can go to the Version control editor, with that button…on the right side of the editor buttons in the tool bar.…So, in here I have on the left, my local revision,…and on the right I have my repository version.…If I make a change to the one on the left,…and I can see that there's one change listed here,…

Video: Explore change history and use the version editor