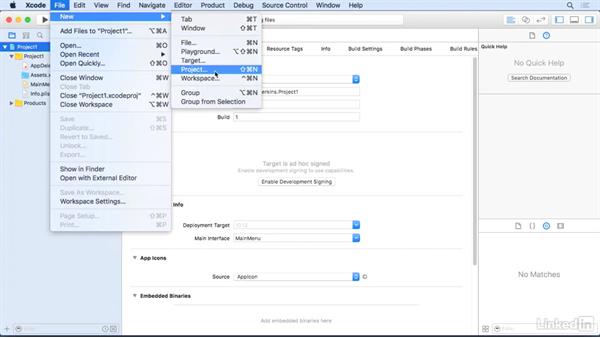 Workspaces are groups of projects in Xcode 8. This video shows how to create a workspace, and how to and or remove projects from it.

And then from there I'm going to hit save.…If I tab over to finder at this point,…make a new window, you're going to see…that file on my desktop, it's an Xcode workspace file.…So in here, we don't have any files in the navigator.…We don't have any editing going…on, or anything else over here.…That's because we haven't yet…added any projects to the workspace.…One way to add a project tot he…workspace is to click the plus button.…From here, click new project.…

Choose any kind of project you want.…I'm choosing Mac Cocoa Application.…I'll hit next, I'll call this project1 and then hit next…and I'm just going save this on my desktop.…