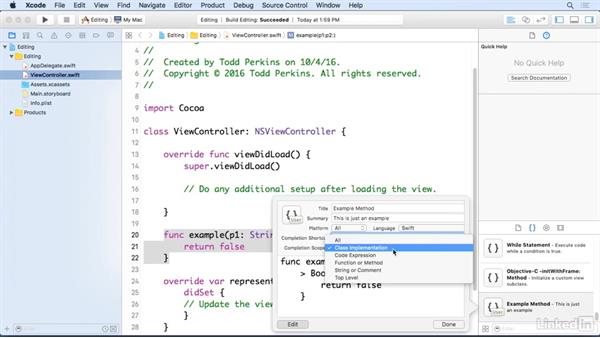 Snippets are reusable blocks of code, and can be used across projects to avoid typing the same code more than once. This movie shows how to get snippets working in your projects.

- [Narrator] Sometimes when you're developing applications…you notice that you're writing the same code over…and over and over again.…Maybe there's a utility method that you like to use…in all the apps that you develop.…You're sick of having to type that out the whole time,…every time you want to use it.…Well, Xcode has a feature called snippets…that enable you to save a code block for easy use later on.…Let's say this is the code block I want to recycle.…Yes, I admit, it's totally useless,…but as an example it works perfectly.…

What we need to do is go to the code snippets library.…That's accessible through the library,…which is at the bottom of the utility area.…In the library bar, choose the open and close brackets.…This is going to show the code snippet library.…Then, simply select all of your code,…and then drag it right in here.…So you'll see that, that box is highlighted…when you're dragging it.…Release your mouse button,…and then you're taken to your code snippets.…

So it says My Code Snippet right here.…