Create a project with Git support 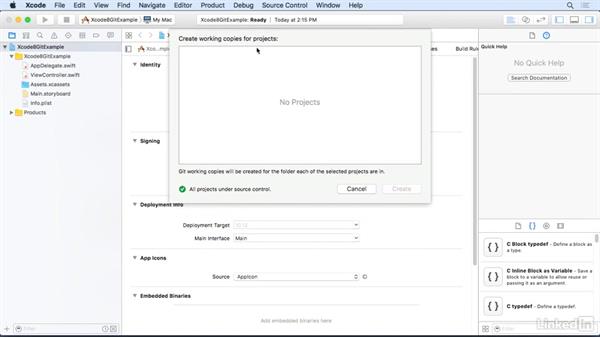 - [Instructor] Let's look at creating a repository…in GitHub and connecting that repository…to an Xcode project, as we look at source control…throughout this chapter.…Of course, if you don't already have a GitHub account,…you can create one for free at github.com.…Once you're logged into your account,…you can click the button to Create a new repository.…Then you're asked to give it a name.…I'll call this Xcode8GitExample,…and then I'm going to scroll down,…and I'm going to leave README unchecked.…

And I'm not going to add .gitignore or a license for now,…and I'll hit Create repository.…In here, next to Quick setup, I'm going to click the button…to Copy the link to my clipboard.…That's going to copy this link right here.…Then I'm going to tab over to Xcode.…From here I'll create a new Xcode project.…This could be any type of project you want,…so it could be an IOS Single View Application,…or a Game, or what have you.…I'm going to choose macOS, Cocoa Application, and hit Next.…

I'm going to name the project the same here…