Compile C++ with the LLVM compiler 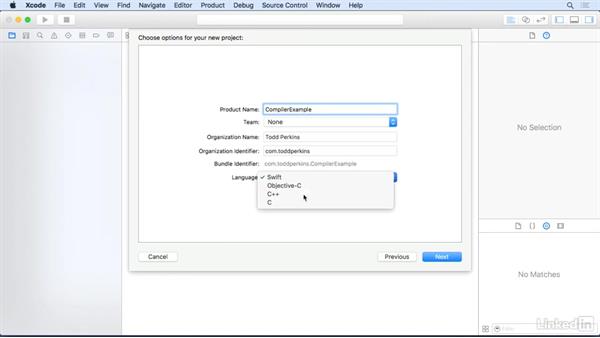 C++ code can be compiled by the LLVM compiler, which is built right into Xcode 8. This can be done by creating a command line tool app. See how the entire process works in this video.

- [Instructor] Xcode ships with a compiler called LLVM. This compiler can compile C, Objective-C, C++, and Swift. Let's see what it looks like creating a command line tool that uses C++. When you're creating your project, under macOS, choose Command Line Tool, and then click Next. I'll call this Product Name CompilerExample, and then choose for the Language, C++.

Now we've seen Swift and Objective-C for both macOS and iOS projects, but for a command line tool, we actually have the option to choose C++. So we'll choose that and hit Next. We're going to save this in Exercise Files Chapter 06, compiling, final. If you're following along as usual, just save it outside of that folder. So in my project, I have my C++ file, main.cpp. I can go into that file and write my C++ code.

I'll make a simple modification here, and run the app as usual by clicking the button or pressing command + r on the keyboard, and in the debug area, I'll see the appropriate output. So if you want to create a C++ command line tool, Xcode already has the templates for it, and it's compiled using the LLVM compiler.