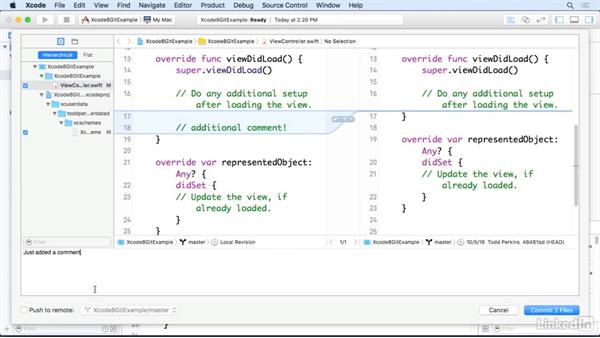 When you've made changes to a project, you can commit those changes and push them to a remote repository with a simple menu command. See how it all works in this video.

- [Narrator] So here I am in…the same project from the last movie,…so if you're following along,…make sure you're using the same project.…Now let's look at committing changes to GitHub.…So I'm going to go to ViewController.swift here…and I'm going to add an additional comment…inside of viewDidLoad.…There's my comment.…And now I'm going to save the file.…After I save the file,…I see this M next to the file in the project navigator.…The M says the file has been modified.…

It is now not matching the file in the repository,…so we can commit the changes…by going to Source Control, Commit,…or by using the keyboard shortcut option, command, c.…So here I see my project,…and I'm going to select ViewController.swift.…By doing this,…I can compare the version in the repository…with the version that I just changed.…So I can see that I've added…this additional comment right here.…

The next step is to enter a commit message.…I'll add one right here:…Just added a comment.…And then I'll check the box to push to my remote server.…Once you've done that, simply click the button,…