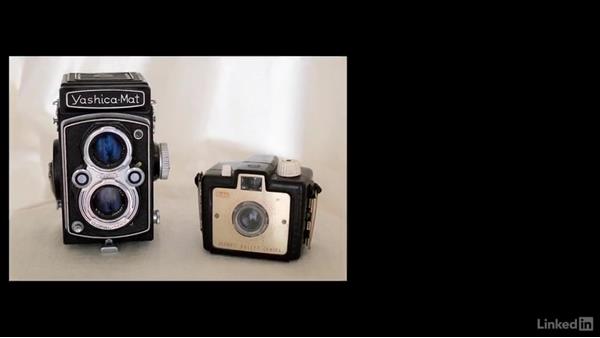 Join Ben Long for an in-depth discussion in this video Understanding ISO-less cameras, part of Fuji X-T1: Tips and Techniques.

- The Fuji X-T1 is what's known as an ISO invariant camera or ISO-less camera. What this means in practical terms is that in certain shooting situations, you might be able to get a better result by using a lower ISO than you think you need. When any camera reads data off of its image sensor, that data needs to be amplified before it can be analyzed. When you increase the ISO on a camera, you're turning up the amount of amplification of the raw sensor data. This makes fainter bits of data more pronounced, which is why this change results in lower light levels being more visible in your final image, they've been amplified.

And of course, when you increase the amplification, you also increase any noise that's coming off the sensor, and that appears in your final image as grainy patterns. This is how ISO increase works on the X-T1, but only up to ISO 1,600. When you increase ISO past 1,600, you're not increasing amplification at all. Instead, when the image is processed, it is digitally brightened during raw conversion. So, what this means is that there's no difference in image quality if you shoot at ISO 3,200 or if you shoot at ISO 1,600 and then brighten the image by one stop in your raw converter.

Both images will appear identical. What's very curious is this is true throughout the ISO range. Here's an image that I shot in low light with the Fuji at ISO 1,600. Here's the same shot taken with the same exposure settings, but at ISO 200. Now, straight out of the camera, it's too dark, but if I brighten it up to the equivalent of ISO 1,600, I get an image that's identical to the ISO 1,600 image that I took. No difference in noise, no difference in detail.

This is not true on a regular camera. For example, here's the same scene shot at ISO 1,600 on a Canon 5D Mark 3. Here's the same scene shot with that camera with the same settings, but at ISO 100 and then brightened up. There's a lot more noise in this image. Now, at this point, you might be thinking, "And, so what? "The 5D does fine at ISO 1,600." That's true, and so does the X-T1. Not only that, but at ISO 1,600, I can actually see the image in my viewfinder when I'm underexposing to that degree by lowering ISO.

I can't really see anything. What's cool about this feature though, is what it allows me to do in post-production. Consider this shot, which I took with the X-T1 at ISO 1,600. It's nice like this, but the lights around the tree are completely blown out. Now, in real life, I could actually see different bulbs and some shapes of the bulbs. If I shoot that image at ISO 200, with the same settings, the lights don't overexpose. They still come in too bright, but I can now, selectively darken them and put detail back where there was only white before.

I can't do this on the ISO 1,600 image. The lights are blown out to complete white. So, ISO in variants doesn't change the way you should be thinking about ISO in your day-to-day shooting but when you get into low light situations and have bright highlights that you'd like to preserve, shooting with this strategy, and then editing can give you extremely low noise results with the option to restore overblown highlights.

5/6/2016
The Fuji X-T1 is a mirrorless camera with a big viewfinder and compact, retro style. It's also packed with features that allow you to fine-tune everything from focus to exposure. The unique "modeless" design provides remarkable flexibility but also requires you to rethink how to approach some shooting scenarios.

In this course, photographer and educator Ben Long demonstrates a set of customization strategies aimed at making the Fuji X-T1 far more responsive and effective. That way, you can focus on composition and creativity, and let your camera handle the rest.
Topics include: