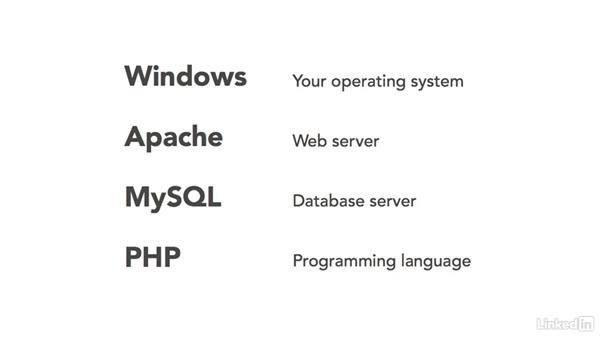 Join Morten Rand-Hendriksen for an in-depth discussion in this video What is WampServer?, part of Installing and Running WordPress: WAMP.

- [Narrator] Before we get started, let me clarify what WampServer, or WAMP as I'm going to call it from now on is and how it works. WAMP is an acronym that stands for Windows, Apache, MySQL, PHP. For reference, MAMP, the Mac version of this, stands for Mac, Apache, MySQL, PHP. So the acronym here pretty much describes exactly what's going on. Windows is, well, Windows, your operating system where you'll do all your work. Apache is a web server application you'll find running on a large portion of web servers around the world.

MySQL is the database system used by WordPress. And finally, PHP is the programming language used by Wordpress. Combined, this gives you a web server with a correct database system and programming language to run WordPress, all running on your Windows computer. With WAMP installed, you are in effect, turning your Windows computer into a web server much like the web servers you would host WordPress on on the live web. And under WAMP, your WordPress site will run exactly like it would run on a live server on the web, except locally on your computer.

The major differences between running Wordpress on a web server on the web and running Wordpress on WAMP on your Windows computer are pretty obvious. Because WAMP is installed on your computer, you don't need internet access to get to and work on your WordPress site. That also means the site is only accessible from your computer, that is, unless you've decided to make your computer a public web host, something I do not recommend you do. But the true benefit of having WordPress running on WAMP on your Windows computer is that you can work with the files directly and you don't have to keep uploading and downloading them to and from a web server to get everything to work.

They're all there, ready for you to work and experiment with right on your computer. And that means you can do all your development and all your experimentation right on files in your computer and immediately see those changes take affect in the browser.

11/21/2016
Installing WordPress on your computer gives you a perfect testing ground for experimentation, theme development, plug-in testing, and website development. This course is designed for Windows users who want to install and configure WordPress locally on a PC with WampServer 3, the open-source software stack that sets the stage for more serious WordPress development. Author Morten Rand-Hendriksen covers the configuration options and settings to get you started developing in WordPress quickly. Learn how to set up multiple sites and custom domains with virtual hosts, all in a safe and accessible environment.
Topics include:

Video: What is WampServer?