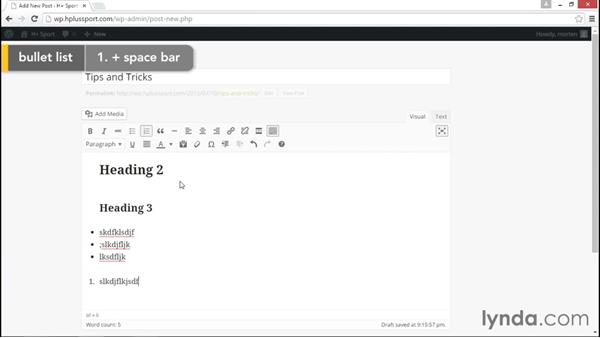 - In the previous movie, I showed you how to use the tools within the content editor to style your content. And that's all well and good, but you know as well as I that when you're in the zone and you're writing out your content, you don't really want to stop, and then take your mouse, and then click on a button, and then highlight your content, and do all that stuff. You just want to write it out, and then magic should be happening, right? This is the internet, things should happen automatically. Well, in WordPress, a lot of the tasks that we repeat over and over are actually automated. You just need to know how to make them trigger.

So let me give you a couple of examples. If you're writing an article, you're probably going to have maybe some headings, so Heading 2, or Heading 3, all the way up to Heading 6. And you could go and use this dropdown and select Heading 2, and so on, but that's quite tedious. Instead, you can also do this. Write two pound signs and a space, automatically turns it to Heading 2. Three pound signs and a space, Heading 3. You see where this is going. So that makes headings really easy.

You want a heading, just hit two pound signs and a space, now you have Heading 2, then you hit Enter, then you write your paragraph, time to get another heading, two pound signs again, very easy. What about ordered or unordered lists? Well, if you hit a dash and space, you automatically get a bullet list. Here we can write out some bullets. If you want an ordered list, type in one, punctuation mark, space, now you have an ordered list. This is both neat and really quick. Now, this shortcut behavior also extends to blockquotes. If you put in a larger-than bracket and hit space, you automatically get a blockquote.

And to get out of the blockquote, hold down Control on Windows, or Command on a Mac, and hit Return, and you jump back to your paragraph. Now these are all hidden behaviors inside the editor that change the context of what you are writing. But you can also use standard shortcuts that you're familiar with. For example, if I type in a paragraph here, I can highlight any of this text, and then hit Control- or Command-B to make it bold, I can highlight some other text, Control- or Command-I to italicize it, hit some other text, Control- or Command-U to give it an underline, and if I want strikethrough, I can do that on a Windows computer by hitting Alt-Shift-D, and on a Mac by hitting Control-Option-D.