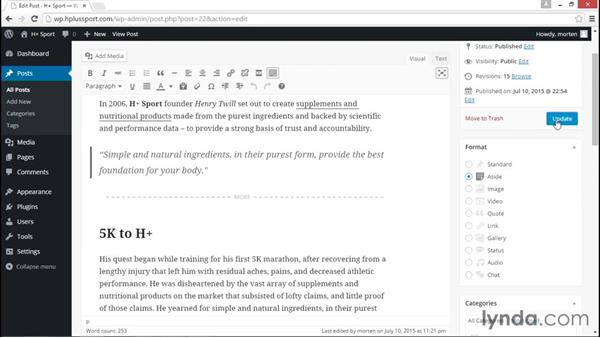 - There is one panel in the right sidebar, sitting right under the Publish panel, that I've only mentioned in passing before. That is the post formats panel, and you'll remember I collapsed it earlier. I also mentioned that, at least for now, you should avoid using it. So now I'll explain why. The post formats panel is meant to give you the ability to specify what type of post you are creating. An image post, a video post, a gallery post, a quote, et cetera. This stems from a project that was started some years ago to make WordPress more modularized, however, during that project it became clear that while the intention was good, the implementation of post formats was more confusing than helpful, and the project lost traction and interest.

It is this inconsistency that makes me say just turn post formats off. The experience is at best lackluster, except for a very few specific themes, like Twenty Thirteen, and if you use post formats and then change to another theme, you pretty much have no idea what will happen. If you're going to use post formats, I recommend for now, to stick with only the Standard format, which does nothing, and also the Aside format. That's because, unlike the other post formats, Aside seems to be fairly well supported across themes.

So what does the Aside post format do, you say? Well, if I update my post now that I've set it as an Aside, and then jump to the front end, you'll see that the post displays somewhat differently from what it did before. Depending on the theme you're using, the Aside will display either as just the post without a title, or the title will be moved down below the post, or you may not have a link at all, you just see the post itself. This Aside post format is actually meant more like a social media update that appears inside your site.

But again, this is entirely theme dependent, so you have to test how these post formats work with your theme. All that said, there is some themes that implement post formats really well, and if you find a theme that works well with post formats, by all means, use them. Just keep in mind, that when you switch from one theme that's using post formats well, to another theme, you don't necessarily know what's going to happen to your content, so you may have to go back and realign the post formats for all of your posts.

Now there's two more things I need to point out with post formats that may be useful even if you don't use them for anything else. Now that I've set my post to be an Aside, if I go to the index and look at all my posts, you'll see that I have a little Aside icon next to my post. So, if you have a lot of different posts in your site, and you use the different post formats, in the post index you'll be able to see which posts are assigned to which format. And, if I jump to the front end of my site, and scroll down, you'll see that my Aside has been highlighted as an Aside, and if I click on this Aside link in the bottom meta content of my site, I'll be able to see all the Asides in one Aside index.

Now again, this is all theme dependent, so you have to test it with your particular theme. Bottom line, unless you're using a theme that has implemented post formats in a very specific way, and you have no plans of ever changing to another theme, I would avoid post formats for now, and toggle the panel off in Screen Options.