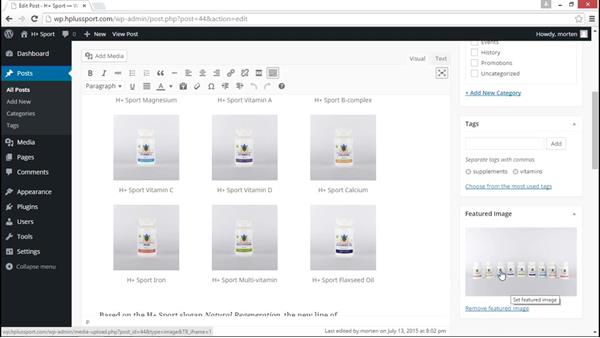 And this time instead of working in the content editor I'm going to instead go to the right hand panels and scroll to the bottom and find this Featured Image panel. This is the only panel we haven't addressed yet, so now it's time to use it to add a Featured image to our post. The panel has only one button that says Set featured image. I can click the button. This opens a different version of the media uploader. So here you see I can only Upload Files or select files from my Media Library. So I'm going to click Upload Files, go to my folder with images, and grab the image that I want to upload.

So I'll upload this product line photo. Then as before, I need to add all the attachment information, so I'll add in H+ Sport Vita, Supplement Product Line. And then I'll copy that and paste it into the Alternative Text. Now the featured image will never be displayed with a Caption, so there's no point adding a Caption in right now unless you want to add this image into some other post or page later on and you may want to use a Caption at that point.

Once I've added my Title and my Alternative Text I click Set featured image. Now instead of this image being added to the content of my post you can see it appeared down here in the Featured Image panel. This is the preview of what the featured image will look like and if I want to I can click Remove featured image, take it away, and then I can add a new one. But if I think this is the correct one I'm going to click Update. And go and View my Post and you'll see something has changed. Unlike the images we added previously, either as the gallery or single images within the post, the featured image is displayed outside the post.

Meaning when people come into the site they can click on this gigantic image at the top to go to read the full article. And that's not all. If someone goes to my site now, finds this post, and shares the URL to the post to either Facebook, or Google+, or another social media page you will see this featured image show up as the preview image in that post or page. So rather than Facebook randomly trying to find an image in your post and then picking one Facebook will pick the image that you chose as your featured image.

In addition, if you use certain themes they will use the featured image as a highlight when you see indexes of available posts and they may even place your featured image in the sidebar or elsewhere inside widgets. Now again, this is all theme dependent, but in general if you write a post and it has images you should always try to add a featured image both because it looks much better, it adds functionality to your site, and it ensures that you can control what images are shared when people share your content on social media.