Changing the language of your site 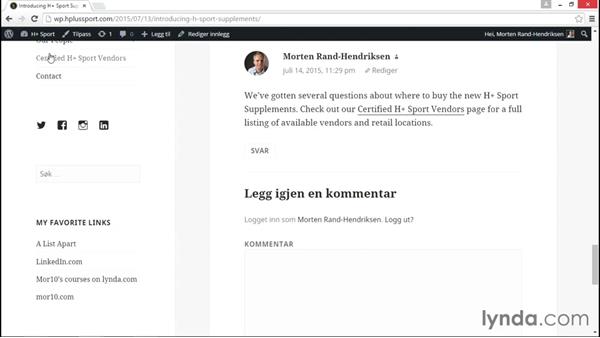 - In the previous movie, you may have noticed that I deliberately skipped one Setting on the General Settings page. It's a setting that's all the way at the bottom called Site Language. Now, you'll remember, originally, when you set up your new WordPress site, you got to choose what Language you wanted to install Wordpress as at the very top of installation process. Well, if you chose English or something else, and then you decide to switch to a different Language, you can do so right from the General Settings. Now this is a pretty interesting feature in WordPress, but has only become available in the last couple of versions, and it allows for much better internationalization of Wordpress.

Take me as an example. Right now, I'm located in Vancouver, Canada in North America, but I'm originally from Norway. So if I wanted to set up a site in Norway, I would probably want my user interface to be in Norwegian, and I would also want the front end to display all of its contents in Norwegian. So for example, it wouldn't say "comments", it would say "kommentarer". In that case, I would need to change the Site Language of my site, and I can do that right here with this drop down menu. From here, I can see the Installed Languages, those are the ones that have been packaged into my installation, as well as all the available Languages, and here you see you have lots of options to choose from, including Farsi, and Greek, and Russian, and Chinese, and bunch of different options.

So I'm going to choose Norsk bokmål, which is my native Language, and click Save Changes. You'll notice something quite dramatic happen here. So now that I've changed the default Language of my installation, you'll see the entire user interface has now switched to my Language, so now everything is in Norwegian. And what's cooler, if I jump to the front end of my site, you'll see things like the Search bar now says Søk instead of Search. You can see that the WordPress toolbar is in Norwegian, and if I go to a post, you'll see that at least some of the posts is displayed in Norwegian rather than English, so here it says, Legg igjen en kommentar instead of saying Enter your comment.

Some themes will shift with lots of different Language options available, other themes will not. In some cases, once you switch to a different Language, you have to go to updates, and then check if your themes or plugins need to be updated as well, and some themes and plugins have great Language support, other ones do not, so here you have to be careful. You can create your own translation files for your themes and plugins, but that's far outside the scope of this particular course. Now there's one more interesting scenario I should address here.

I have experienced this myself so it's worth pointing out. Sometimes, you are handed or given access to a WordPress site that's set up in a Language you don't understand. So unless you're Norwegian, when you're looking at this, you will not understand what anyone says. In those cases, you may want to switch the site back to a language you do understand for your own purposes. Now this would only be for development purposes, but if you have full control, you can do that. In that case, you just have to remember where the Language settings are hidden. So the Language setting is found under the icon that looks like two fingers? Says it's the Settings icon, under General, but if you just click on Settings, you're automatically taken to General.

Video: Changing the language of your site