The importance of the script 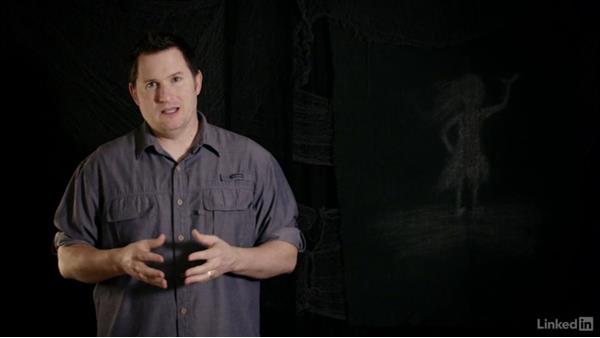 - In this training series, we're going to take a deeper look at screenwriting and storytelling. Story is the foundation for every single choice by the director, actors, the photographer, wardrobe people, visual effect supervisors, everyone. And we certainly had a lot of interesting writing challenges with "The Assurance," which we'll look at. We'll start the course by investigating the basics of storytelling that have really been the same for thousands of years, and how those principles have been utilized in some of the best films ever made. Then we'll look at our experience with "The Assurance." How we created mythologies and linguistic rules for this fantasy world.

We'll look at how to write a screenplay with all those zany screenwriting rules and some tools to help you with that process. With "The Assurance," we decided to rewrite the film after seeing the rough edit in post production. We cut the film down from 14 minutes to seven minutes and completely changed the story. So we'll look at that whole process and why we made the choices we made. It's fascinating. Writing is fascinating. Writers really shape all of humanity with their words and their stories. When you see Luke Skywalker tired of his boring old circumstances and feeling this need to move out of the family basement and get a better job.

- [Luke] It just isn't fair. Oh, Figgs is right, I'm never gonna get out of here. - [Voiceover] You might realize that you're in a similar situation and you're not alone. Or when you see Napoleon Dynamite liking really random and quirky things that no one around him relates to. (Don laughing) Or when you see Marty McFly get stranded and struggle to go home again. - [Marty] Woah, woah, Doc. Stuck here? I can't be stuck here. I got a life in 1985. - [Voiceover] We can relate because on a deeper level we've all wanted more out of life or felt like we didn't fit in.

(locker slams) Or really wanted to be back home. On a more personal note, my wife, Heather, who co-wrote and co-produced "The Assurance," gave me permission to tell you about when she was 11 years old and her grandmother died, Heather and her grandmother were very close and that was also the first time anyone Heather knew had ever died. So she was devastated. Soon after she saw the movie "My Girl" with Macaulay Culkin. Which is about two children that are friends and in the course of the film, one of them dies.

The other child then has to deal with that. - [Voiceover] I'd like to read a passage from (mumbles) - [Voiceover] For Heather it was therapeutic to watch another child dealing with death. - The writer of that film was almost like a psychologist to my wife, even though they had never met. Writers also create a time capsule of sorts, encapsulating the values and issues of an era. Now this can be disappointing, almost haunting. Such as in the 1915 film "The Birth of a Nation," which was a brilliant feat of cinematic genius that forever revolutionized film making.

However, there was this one little problem with it. It's basically 165 minutes of extremely racist propaganda that reopened the racial wounds of the Civil War, gave rise to the rebirth of the Ku Klux Klan, and created generations of hatred and strife. So there's that. But even on this subject of race, writers have also created works that have had the exact opposite effect, doing much to heal race relations. To me, one of the most powerful moments in any film in history, is in the film "In the Heat of the Night." Sidney Poitier's character is sent from Philadelphia to a racially divided Southern town to help them solve a murder.

Then the local sheriff tries taunting Poitier's Virgil Tibbs character by asking him what racist slurs they call him back in Philly. - [Gillespie] Well, you're pretty sure of yourself, ain't ya, Virgil? Virgil, that's a funny name for a boy to come from Philadelphia. What did they call you up there? - [Virgil] They call me Mr. Tibbs. - [Voiceover] Now, just by itself that line means nothing. They call him Mr. Tibbs, so what? But in the context of the film, those five words had the power to shape an entire country's perspective about the relationship between two races of people.

I mean, the power that you have in your hands when you start typing those words on that page is staggering. So whether you're a writer, producer, editor, director, actor, whatever, you're understanding of story plays a huge role in your craft. So let's dig in and learn about storytelling.

Video: The importance of the script