Where can you get ideas for stories? 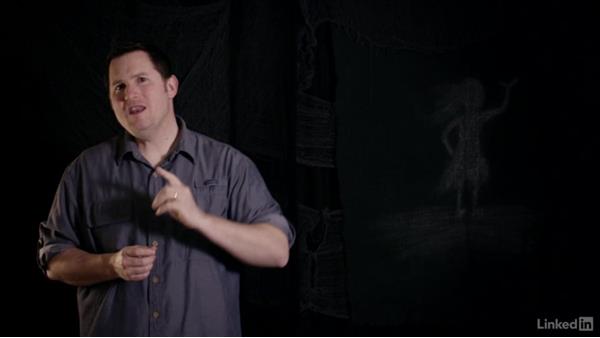 - So all of this story stuff sounds fun and exciting, and you want to write something. Where do you get started? That's what we're going to take a look at a little bit in this chapter. One of the ways that I get most of my film ideas, and actually how I got the idea for "The Assurance," is by pursuing intuitive flashes. In other words, I just see an image in my head, or I'm drawn to a certain type of character, or a scene, or a dynamic between two people. Then I mentally follow that and see what else is there. This is how I came up with the basic story of "The Assurance." It all started with this image I had in my head of a little girl standing on the edge of a massive ravine, with her arm raised.

This terrible and humiliating sketch is all that I saw in my head initially. But I was really drawn to that image. It was compelling to me. Once I have some idea that I'm really pulled toward like this, I'll start asking questions. What is this little girl doing? What's in her hand? How did she get there? Questions are really the writer's greatest friend, in my opinion. Whenever I'm coming up with ideas or if I'm stuck with a well-developed script, asking questions always gets me past that hurdle. After asking a few questions, it wasn't long before I had a more fleshed out scene, of Cordeia with magic in her hand, facing off against Galhattan.

Even though I didn't have the names yet. But having this one image became like a Bible, like this immovable standard that was "the truth." And it's important for me to have these moments that I can latch onto while I'm writing. No matter what else Heather and I wrote, we knew that this image was the truth, and we had to figure out what else was going on in this world. But we at least knew one invariable truth that kept us anchored, in case we had a bunch of wacky ideas that got us off track, which happens to me all the time, actually.

And once I had this defining image, I could then build the story. And this is where writers differ. A lot of writers would be curious about what happens after that. Do the girl and the beast fight? Does she tame the beast with this magic in her hand? There's no story at this point, really. At that point it was just an image in my head. It's my job as a writer to give it meaning and find the story there. Strangely, I didn't care what happened after that. Fights aren't interesting to me, usually. I wanted to know about who this little girl was and how she got here.

As a dad of little girls, I wondered, where were her parents? Did she even have parents? I don't know that I would let my kids go for any reason, and they're not even magical. (chuckles) So I feel like her parents might already be dead. So then, she was raised by someone else. After tossing that question around, we determined that she was raised by her older sister, who probably had to know a little bit about the girl's abilities. How did the older sister feel? What was her role? She was probably resistant to sending the little girl off to that cliffside, so then we explored that.

And in the version of the script that we shot, when we actually filmed the movie, the story was about Teani letting go of Cordeia for the greater good. My point here is that all it takes is one single idea, even a still, very poorly-drawn image in your mind, to get the ball rolling. From there you can ask questions and search and explore that world, until you've come up with a story you wanna tell. Now if you don't get any visions or flashes of intuition, there are plenty of other places to get great ideas, which we'll look at next.

Video: Where can you get ideas for stories?