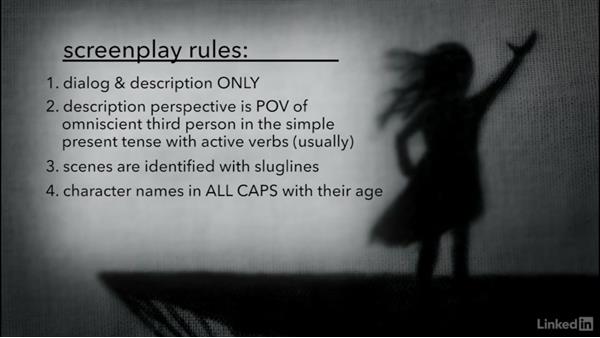 In this very important important tutorial, we're going to look at how to format your screenplay. Now formatting screenplays is not just some pointless formality like MLA formatting for English papers. Formatting for screenplays is a big deal because when you follow the rules, one page of screenplay roughly translates to about one minute of screen time. That means that a twenty page script will more than likely produce a twenty minute film. The Assurance script is a little less than seven full pages, and the film is a little less than seven full minutes.

This is incredibly helpful to know when preparing to create a film. Looking at a screenplay, it can be a little overwhelming to the uninitiated. There are lots of formatting rules. But before the margins and the fonts and all those details, let's look at a few rules for writing a screenplay. The most important rule is that you only have two ways to tell your story: dialogue and description, where you can describe what the camera sees. And that's it! No feelings, no thoughts, no intangibles.

You can't write Bob felt angry, or Sarah waited for three hours, or Ta'ani didn't want to tell Korda'a about her powers. We only put things in the script that can be seen or said. That's rule number one. The second rule is that all description is written from the perspective of an omniscient third person in the simple present tense with active verbs. Sounds crazy, but let me give you an example. You don't wanna write I saw Melissa walk down the street, or Melissa walked down the street, or even Melissa is walking down the street.

Instead you would write, Melissa walks down the street. It's more succinct and more engaging. Third rule, scenes are identified by scene headings, also called a slugline. The scene heading contains three components: a location, whether that location is indoors or outdoors, indicated by INT for interiors or EXT for exteriors, and a time of day. The slugline is written in all caps with the interior, exterior info first, abbreviated with the first three letters and a period.

There is a space and the name of the location, still in all caps. Now this name can be whatever you want it to be. But it does need to be consistent throughout the script if it's the same location. After the location, then space, hyphen, space, and the time of day. If scenes are really close together in time, sometimes of the time of day is continuous, or you could even write later. And that's totally fine. When creating scene headings, this is done every time there's a new camera setup, not necessarily a scene in the dramatic sense. So, if a character is shaving in the bathroom and yelling back and forth with someone in the kitchen, it will be a new scene heading every time we see each character say something, even though this is technically the same scenes in a dramatic sense at least.

But for screenplays, each change of venue gets its own slugline, regardless of what's happening in the scene. One of the reasons it's done this way is because it will help us tremendously when we break down the script for shooting, which we'll look at how to do in the next training course on pre-production. My fourth rule here, when we introduce a character for the first time, and only for the first time, we capitalize their name and put their age in parentheses. Just that once. We can also write a physical description of them if and only if it is essential to the story.

So, if you imagine a character having blonde hair just because that's how you see it, don't write it in. You are the writer, not the director, so you don't have control over casting decisions. Giving characters a little introduction in the script is basically to just kind of announce the arrival on the scene of a new person. And for the reader to have some sense of who this person is. To help the people who read the Assurance script to know the characters and feel more at home in this world, I also put a little pronunciation guide so that readers knew how to pronounce their names.

Now again, all this is only done the first time the characters are introduced. My fifth rule for writing a screenplay is that you're also allowed to put in transitions and directions with the caveat that you be very careful with these. The film world is a house of order and people get really bent out of shape when you overstep your bounds in every stage of the game. So, putting in the screenplay camera moves, or camera angles, or what music the soundtrack is playing, what type of transition the editor should use, how the actor should perform a scene, all this stuff is really frowned upon.

And at the very least, ignored. Now there are a few notable exceptions here. At the beginning and ending of the script, it's kinda common practice to start and end with the transitions fade in and fade out, respectively. Even if the film actually cuts in or cuts out, as was the case with The Assurance. Transitions are also right-aligned and are all capitalized. And as far as directions go, you can add in directions in regards to the voice of the character. For example, if someone is in the scene but they're talking off-screen and we can't see them, we can use the letters O.S. next to the character's name in the script.

If a character is doing a narration, as was the case in our film, then we can add the letters V.O. to indicate a voiceover. This is especially important in our film because sometimes Korda'a talks in the voiceover and then soon after says lines of dialogue on camera where we could see her. So, these sections in the script would be incredibly confusing without these indications. You can also add parenthetical comments right below the name of the character, which should clarify rather than instruct. In other words, these parentheticals shouldn't be used to tell the actors how to say the lines, like angry or confused or whatever.

The actors and the directors get to make those choices, not the writers. However, if the intent of what is written is difficult to tell without some extra instruction, well, then yeah, you can have a parenthetical comment to clarify what you meant. This is most often the case if something is sarcastic, or someone is talking specifically to one character when there's group of people present. Now, for the mechanical format stuff, here we go. The font is always Courier and the size is twelve points, always.

The margins for action and scene headings is an inch and a half on the light and right. And the margins for dialogue are two and a half inches on each side. Now, that is a lot to remember, I realize. Thankfully there are some great tools that help make this process significantly easier. And we'll be looking at the best of those in the next two movies.