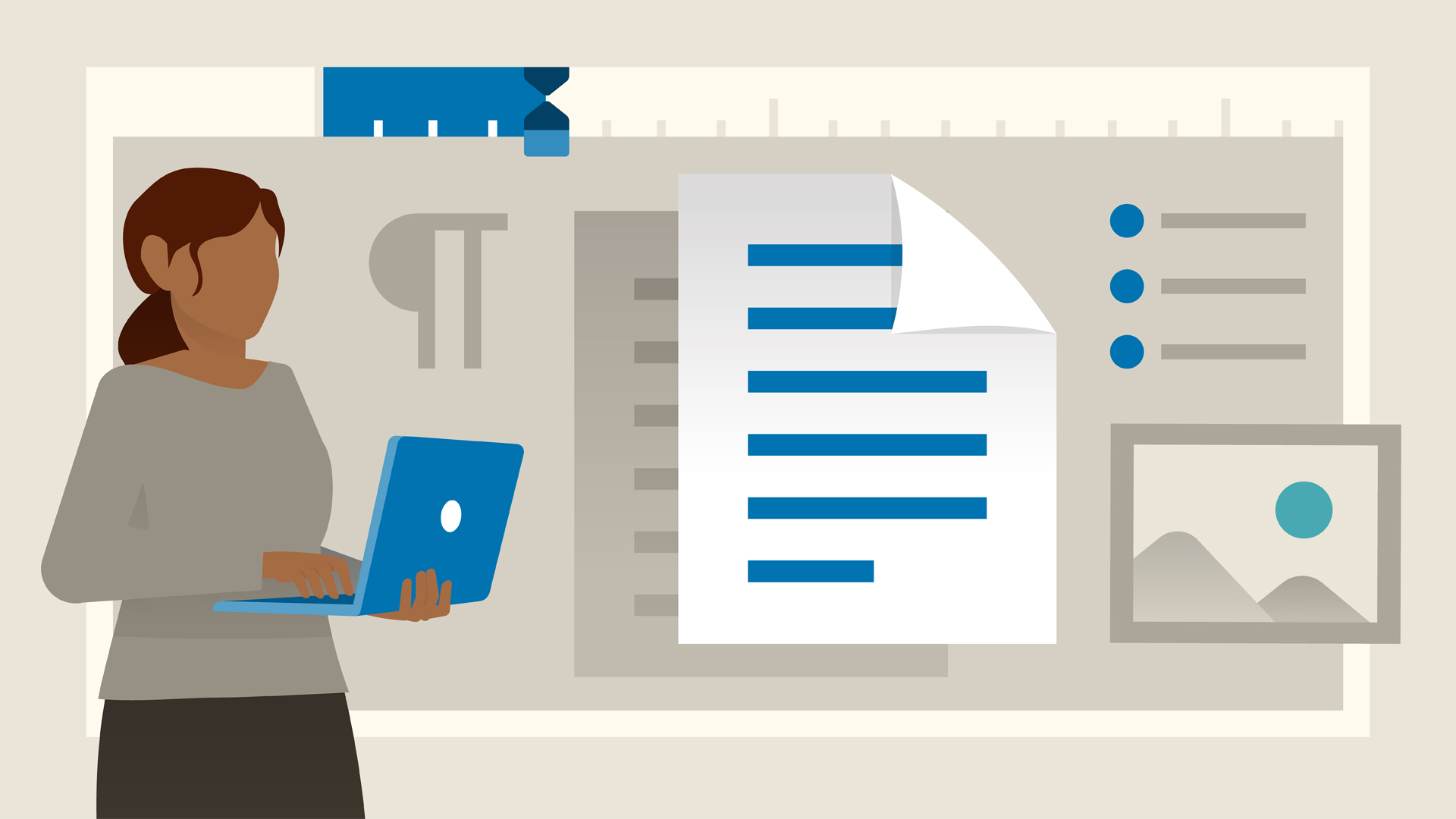 - [Narrator] One thing that can turn a document into an unprofessional looking document is a typo, or spelling error, perhaps using the wrong word. Well these are things we're going to explore in this chapter beginning with something that might have happened to you if you've used Word, where you're typing away, you know you've made a typo, you go back to fix it, and it's already been corrected for you. It's called AutoCorrect, and that's what we're going to explore with a new blank document. Go ahead and just start a new document from the File menu.

With our cursor flashing up here, waiting for us to start typing, let's start to type in a sentence, but we won't capitalize it. Let's type in the word memorandum in lowercase. Now, press enter. Notice how it gets capitalized for you. Word recognizing it's the beginning of a sentence or a paragraph. In this case, just the title, and it capitalizes for you. That's an option that's on by default but of course, can be adjusted if you want. Let's type in another sentence in lowercase.

We, leave a space, and it gets capitalized, knowing it's a beginning of a sentence, were pleased to receive, now let's misspell receive. R, E, C, let's do I, E, V, E, and hit the space bar. It gets corrected for us, automatically. That's one of the words that is in the dictionary that we're going to explore momentarily. Let's type in your CV on let's type in Monday in lowercase.

Hit the space bar, and you can see what happens. It gets capitalized as well. Let's hit backspace, put in a comma, leave a space, and type in a month. Let's type in August in lowercase. Now, as we start typing, you can see what happens. Eventually, a little pop up appears indicating you're probably trying to type August. It should be capitalized and if you press enter, Word will fill in the rest of the month for you and capitalize it. Let's go ahead, leave a space, and type in a number.

Hit the period, there you go. Let's hit enter a couple of times. Type in best regards, and you can see, as soon as we type in best in lowercase, and continue typing with the space, it puts in the capital B for us. Hit enter a couple of times, and let's type in Red30, and we want the trademark symbol after this. Let's type in an open round bracket, TM, and a closing round bracket. You can see, as soon as you hit that closing round bracket, it changes the contents to the trademark symbol, even superscript up here at the top of the 30.

Very cool stuff, all part of AutoCorrect. Let's explore that AutoCorrect feature now by going to the File tab, click there, select Options down at the bottom, and from here, click Proofing. So a number of things are happening automatically, even the spell checker, you can see is ignoring things that are in uppercase, might be an acronym, and won't worry about spelling, and automatically correcting things if they're uppercase. So long as this is checked off. You can turn that off just by clicking the check box. I like to leave that one on.

Also, words that contain numbers like Red30 going to be ignored, won't be automatically corrected, won't show up as typos or spelling errors. Same thing for internet, email, file addresses. Flagging repeated words is a good option. Sometimes, you're typing away, you pause and continue typing and you type in the same word twice. Well in that case, one of those will be removed with flag repeated words. But up here is where we can access the AutoCorrect Options that we saw in action a moment ago. Go ahead and click that button. You can see things like two initial capitals, you're holding down the shift key a little too long, it'll remove the second capital.

There's the capitalizing of the first letter in a sentence. We saw that happen, same thing what happened in table cells, the names of days, we saw months as well, and if you accidentally have the caps lock key on, you don't know it, you might get this funny looking lowercase and the rest in caps, that'll get corrected for you as well. Now, down below, with replace text as you type checked off, everything we see on this alphabetical list down below is going to work, and any of these can be removed. You can even add your own. There's copyright, there's TM in brackets, replace with the TM symbol.

As we continue to scroll down using the scroll bar, you can see a number of little shortcuts for arrows and so on, but then we get into the words that are commonly misspelled or typos can occur using those words, they'll get fixed up. Look at accident here with an A, should be an E, accommodate, and as we scroll further down, we're gonna see some other ones like the word and, A, D, N, you're typing too fast, it'll get fixed up for you. Receive is on this list as well, and as we scroll through the list, you can see it's quite lengthy.

And the cool thing is we can add our own if we want to as well. So if there's something you're typing out, maybe it's a lengthy company name for example, you can create a shortcut in here. All you have to do is type in what it is you want to replace, and the replacement in the With field up top. So let's say Red30, it's not all that long but we can create a shortcut, r3. And every time we type in r3, we want it replaced with Red30 with a capital R, and the 30 right next to it, like so.

When we click add, it gets added to our list, alphabetically, click OK, and then OK again. And now, if we come in here to Red30, click right after the zero and just take it out. Every time now going forward, we can just type in r3. As soon as you hit the space bar or the enter key, you can see Red30 appears instead. You can take out the space so TM is right next to it, like so. Now at any time, you can go back and add more.

You can delete any of those options that maybe are interfering with the things you're doing. For example, let's go back to File, Options, and with Proofing selected, click AutoCorrect Options. There's one thing that kind of bothers me at times, and that is capitalizing the first letter of sentences. Yeah, it comes in handy if you forget, but if you're using abbreviations that have a period, automatically, the next word is going to be capitalized even if it's in the middle of a sentence, recognizes that period, and if you don't like that, just come in here to turn it off.

If there's anything on the list down below you don't like, simply select it, and hit the Delete button. So for example, if we come in here and type in r3, we decide we're not going to use it, it'll take us right there, with it highlighted, clicking Delete removes it from our list, and we can click OK, and OK to confirm those changes. So AutoCorrect can come in very handy, helping you out with typos, spelling errors, even shortcuts. It's nice to know we can add our own as well.

And keep in mind, you can always go in, take the ones out that you don't want, and turn off the features you don't like.