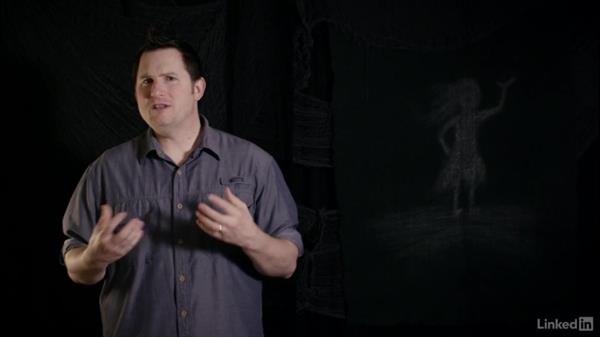 Her older sister, Ta'ani was. During editing, we realized that this complicated things made the story weaker, so in post-production, we re-wrote the script, including a new narration, and changed the main character. In reality, both of these characters make powerful choices. In the original version of the film, Ta'ani struggled with sending young Korda'a on her mission. It was a brutal test of her faith. So, that was the initial spine of the story. Now, in the current version, she still goes through that process, but instead, we now focused on Korda'a's journey of discovery.

Protagonists need to be strong characters. What does that mean? Well, it means they make choices. Usually tough choices, often magnanimous choices. A lot of times, writers get caught up in all of the bad stuff that happens to their protagonist. Aliens attack, and then her car breaks down, and then she gets fired from her job. Some of that's fine, but if it feels like the movie is pulling the protagonist along, instead of the other way around, well, that makes for a weak character. A great example of doing this well is the action classic, Die Hard.

John McClane had a lot of bad stuff happen to him, but he still made a lot of choices to hide, to resist, to fight or to get help. - May day, may day. - As an audience, we respect characters that actively make decisions. Along those lines, it's important that your audience can identify with your protagonist. Often, writers make them friendly and likable, but they don't have to be. We tend to like people that can be vulnerable and having strong likes is a form of being vulnerable. This is why a petulant character like Napoleon Dynamite can be a great protagonist. I mean, he loves ninjas, and ligers, and tater tots.

He gets bullied for his likes, but he still loves what he loves, and that's an attribute that audiences admire. We also tend to like characters that are really good at something, or that make us laugh. We also empathize with characters that have bad things happen to them. Because the protagonist is almost like our tour guide through the story, it's important that we connect with them early. Even if they're generally unlikable, protagonists will usually do something early on to endear us to them. So that we feel good about going on this journey with them. In The Assurance, we had Korda'a tell us about the bleak situation that her world is in.

And then we see her get abandoned by her sister. We don't know anything about her, but we empathize with the little girl that's stranded and alone. She then expresses admiration and appreciation of the sister that just left her. And that suggests that she's got a big heart. We don't get a sense of bitterness from her which is admirable. Protagonists are also, almost always the ones that have the most screen time. Even in Amadeus, which was about Mozart, everybody knows who Mozart is, the protagonist was actually Salieri. Salieri was bitter and hated Mozart and was extremely cruel to him.

And Mozart was so funny and fun, and talented and the movie was named after him, for crying out loud, but we saw the life of Mozart through the eyes of Salieri. So, Salieri was the protagonist. As with all the principles in this chapter, the rules certainly can be broken. In Alfred Hitchcock's famous Psycho, for example, the protagonist played by Janet Leigh, who was the biggest star of the film. The protagonist is the only character we connect to, and then she's killed off early on in the film. I mean, made audiences curious. Now what's going to happen with no more protagonist? Generally speaking though, killing off your main character a third of the way into your movie is a bad idea, but it can be done.

You also might be wondering, what if you have an ensemble cast, and the film was about the whole group? Are they all protagonists? The answer is almost always, "No." While it's great to have lots of powerful and memorable characters, stories are much stronger when there is a single person who's perspective we connect to the most. Look at the TV show Lost, for example. I mean, that was an ensemble cast, if ever there was one. So many great characters in that show, but we still start and end with Jack Sheppard. It was his arc that was the spine of the show.

And speaking of arc, let's look at what that's about in the next movie.