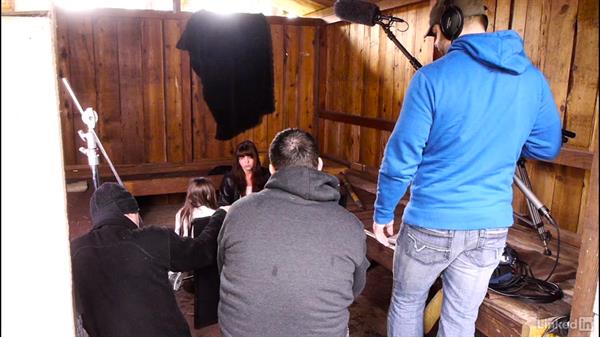 Join Chad Perkins for an in-depth discussion in this video Making our budget, part of Creating a Short Film: 03 Pre-Production.

- In this chapter we're going to look at how to create a budget, and also the budget we used on The Assurance. In creating a budget you want to not only budget for production, but you also want to make sure that you create a budget for post production and marketing as well. Usually this is something that's done by crew members that have experience with making a budget, maybe a line producer, or maybe a first assistant director, or in other words a first AD as they're called. Our first AD was Gevin Booth, and he really helped me when it came to the budget. He has tons of experience in this arena and at the time we did this, I did not, especially for a cast and crew with this many people and positions.

Now there are two basic ways to approach creating a budget. You can start with your schedule, and then use the schedule to determine the budget, which we'll look at how to do in more detail in the next tutorial, or the other way, is if you already raised your funds, or using your own money, you could start with the amount you're planning to spend, and then work backwards to create a detailed budget from that. Now if you already know how much money you're going to spend on your film, would you still want to make a budget? The answer to that question is yes.

Definitely, absolutely, yes. You see the budget is not used only to let you know how much your spending, but it's also a blueprint of how you're allocating your resources, and as we'll see later in this chapter amateur film makers will often be very loose with funds during production and then realize once they get to post-production, that they don't have enough to finish the film, or at least finish the film very well, or the other way, you might end up a great completed film, but don't have any money left over to submit it to film festivals so it could actually be seen.

A budget keeps you on track so you don't have any catastrophic surprises that derail your film. We'll revisit this idea later in this chapter when we look at preparing for contingencies. As mentioned a couple chapters back, I really recommend making your shot list and schedule before creating your budget, wherever possible or if that works for you. After reviewing the tentative schedule that Gevin and I had created I realized that the hut scene needed just a few people, so I put that scene on it's own day, and that saved us a lot of money. That's not only less crew members to pay, for the day, for their daily rate, but it's also less crew members to feed as well, and all of that helps the budget.

However I also made a blunder in this case, we based the budget off of this same tentative schedule which initially had Andrew Tribolini returning on Sunday. So I booked him for two production days, and accounted for that in the budget, but as it turns out, the only time we used him, was Saturday, but since I booked him for two days, I paid him for both, even though he only worked on one of them. It kind of felt like the right thing to do. But that was an unnecessary expense that probably wouldn't have been made by a more seasoned film maker or a film maker with more time in pre-production, or more team members helping out in pre-production.

Now you'll notice here a pretty hefty budget for food. This is important. You've got to take care of your crew and keep their morale and energy up if you want them to help you make great content. Not all people eat the same things. People have allergies and preferences and religious and culture restrictions on their diet. So we were sure to get that information from every member of the cast and crew and make sure that everybody had delicious hot meals that they would actually enjoy eating.

Now 400 dollars probably sounds like a lot of money but to feed dozens of people, several hot meals over several days, it's actually pretty inexpensive. We had really high-quality food because Susan Robinson is a master at cooking great food for really cheap. For craft services, we had most of this stuff donated, but we still spent 200 dollars. Where did that money go? It went to Starbucks. It was literally 200 dollars in coffee for our shoot. I don't drink coffee but it seems like every other film maker on the planet does, and if there's not hot coffee always on set, people will complain, maybe get violent.

So consider coffee a necessary expense. In the next tutorial we'll look more closely at the personnel portion of The Assurance budget.