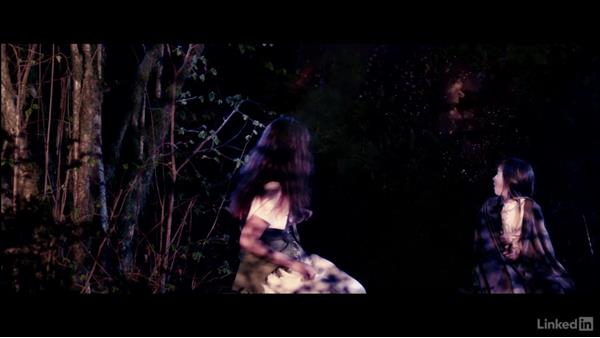 - Now that we've talked about some screenwriting basics, in this chapter, we're going to do like a case study, and dig a little bit deeper into the story and script of The Assurance. Before going forward, I strongly recommend watching the movie, The Assurance, which you will find at the beginning of this training series. In this movie, we're going to look at our original script, which is the version of the script that we actually filmed during production. This was very different from the script that created the final movie. In post-production, we decided to scrap our plans, completely re-edit the film, change the protagonist and more.

We edited the film down from almost 14 minutes to under seven minutes. I'll give you an overview here, and then, we'll look at why we changed it so drastically later on. In the original story, the older sister, Ta'ani did the voiceover and she was also the protagonist. We still started with Korda'a after Ta'ani left her in the wilderness with a very powerful narration by Eva Jane, who played Ta'ani. After we got to the shot of Korda'a cooking her dinner, Ta'ani gave us most of the exposition about the world. Another big part of the old story was that the women were barren.

After the intro, we started the core of the film, which was one really big flashback. The main characters are in the hut. Korda'a wants to go on a journey, and Ta'ani postpones it, and this is act one. Life as it always was. Ta'ani hides Korda'a from the public eye. Then we see Ta'ani go into town with Korda'a hidden in her cart. We see the world a bit, and while Ta'ani is distracted, Korda'a sees an apple dropped by a villager and falls out of the cart trying to pick it up. The town is shocked to see a living child, the warrior Gar'uun takes her and Ta'ani and brings them in front of the town council.

There, there's some debate about what to do with the child, and the chief, Mar'Kalen decides that she should be put on display so that everyone sees that life is returning to normal. The town then gathers to observe the child in this night scene, and while here, Ta'ani realizes that she can't keep Korda'a hidden forever and tells her about the powers both of them have. She creates an explosion, as both a teaching tool for Korda'a and a distraction to sneak away with her. They flee into the wilderness after the explosion, but a group of hostile townspeople hunt them down.

Korda'a and Ta'ani make it to a clearing where they assume that they're safe, but Ta'ani sees in the distance, the people looking for them. So, she says a quick good-bye to Korda'a and distracts the bad guys so Korda'a can serve her purpose. The guys here in the background were actually removed in post-production for the final version of the film, which we'll look at how to do in the upcoming training courses on visual effects. Then we cut back to Korda'a with the fish, as kind of a bookend to this big flashback, and then we rejoin her on the rest of her journey. It's worth it to note that Ta'ani's voiceover here was very powerful and well-performed by Eva Jane.

The challenge is knowing when to let go. - Oh man, I love that moment, and it was so hard to cut that. The full screenplay that we shot, as well as the full screenplay that it eventually became are both included with the exercise files that accompanied this training if you have access to those. There are also other drafts included as well, in case you kind of wanted to go through these versions and see what we've changed. We'll also watch the entire rough cut of the original story in the upcoming training course on editing, it's a little long, a little boring, but it's a fascinating look at film.

And a little later in this series, we'll look a little bit more in depth about what was wrong with this version of the story, and what changes we made, specifically and why. But I think it was worth losing some of these great moments and great performances from the original version in order to make the story better overall.