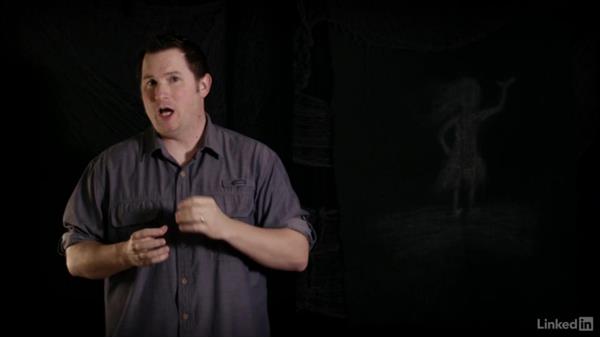 - Let's talk a little bit about genre. Genre is the type, or category of your film, like horror, comedy, romance, drama, science fiction, whatever. This was a tough one for me. As I talk a lot about in these courses, I wanted to make as many earnest mistakes as possible for this filmmaking training. And almost every movie I've ever made up until that point had been a comedy. I love writing comedy. I feel comfortable with it. But for this project I wanted to do something that was the opposite of comfortable for me so that I'd have to stretch, and also so that I'd make mistakes that this lynda.com audience could learn from.

So I decided on a dark fantasy film with a heavy dramatic component. Digging into a genre I've never written for was fascinating to me, if not kind of intimidating, frankly. The thing with genre is that you kind have to follow some conventions or audiences feel tricked. Many movie fans have felt betrayed by marketing to go to a movie expecting a horror, or a comedy, but then getting something completely different. I remember seeing previews about Saving Mr. Banks, the story of Walt Disney getting the rights to Mary Poppins.

The trailers we saw suggested that it was a very light-hearted, live-action family film and our kids love Disney stuff and love Mary Poppins, so we all went out to see it on opening day. Now, I absolutely loved the movie, it was fantastic. But I was frustrated that it was not as described. Half of the film graphically depicted a child watching her father deal with drug addiction, then cough up blood, and then die. My children were kinda traumatized. So it's important that if you market your film being a particular genre, that your film delivers on the expectations of that genre.

For The Assurance, the music, marketing material, the trailer, color grade, all of it suggests a fantasy film. And it delivers on that. It takes place in a fantasy world with completely different rules. There's magic, there are mythical creatures and mythologies. However, as an independent filmmaker you can also break some conventions. For example, fantasy films are generally geared towards males. Historically, men have been the ones to get super excited about fantasy. So fantasy films have generally been stories written by men, about men, for men.

So I thought it would be interesting to turn that crazy stereotype on its head and make a fantasy film that not only stars two female lead characters, but is also essentially a drama about sisterhood. Also, the film makes every female a sympathetic, heroic character, and almost every man either a shadowy character, or a villain. These general rules aren't necessarily an essential part of the fantasy genre, more like a tradition I guess. So why not go in a new direction with it? Now, this is one of the strengths of indie filmmaking.

We can traverse more obscure territory like this. But be aware that when you're doing a commercial project, and money is on the line, those with the cash might not be willing to take such a risk. This is why independent filmmaking can be so brave and commercial filmmaking can be really slow to adapt and change. Just something to be aware of. The bottom line here is that genre conventions are something to understand and respect. Occasionally, you may rebel against certain genre traditions like we did on The Assurance, but it's important to stick to others, so that your audience doesn't feel tricked into seeing your film.