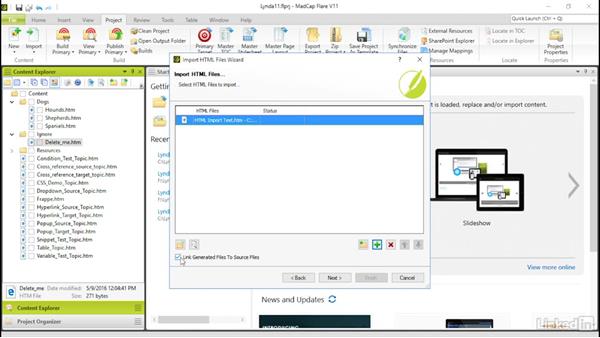 If you get new material written in HTML format by subject matter experts who don’t use Flare, you can easily add it to your Flare project. Learn how to import that material and see various import options.

- [Voiceover] In this video, you'll learn how to import HTML files into a Flare project. You might want to import an HTML file into a project if your subject matter expert created the material in HTML form, maybe using a tool like Dreamweaver. So, up on the screen, I have a sample, simple little HTML file, that we'll use to demonstrate the import. It's got a heading, it's got two subheadings and it's got some text under each heading, so, pretty simple, but fairly representative.

So, I'm going to go back to Flare, and I want to import this file. So, what I'll do is, I will click up on the Menu, on Project, and over at the left end of the ribbon, I'll click the Import pull-down, and select HTML File Set. I'm going to get the first screen of the Import HTML Files wizard. And, I'll go with the default setting down at the bottom, which is Import the File into this Project. So, I'll click the Next button.

It's now asking me which HTML file, or files, to import. So, at the bottom right, there's this green plus-sign icon, The Add Files icon. I'll click on that. I get the Open File dialog box, and I'll go to the folder that contains the file that I want to import, it happens to be this file right here, HTML Import Test, Click on Open. Several other options on this screen, probably the most important one, is the one at the bottom left, Link Generated Files to Source Files, what this does, is it creates a live link between the topic that you created the first time you import the file, and the original file that the subject matter expert might have.

If you create this link, what happens is, there is a live link between the Flare project and the original HTML file, and if the owner of the original HTML file makes a change, that change can automatically ripple up into the Flare project. So, it sounds like a good idea, but it can be a little bit tricky to manage, and I'm going to suggest that for now you deselect the Link Generated Files feature. Now, I'll click the Next button, and I have the option of importing this HTML file to different places in the project.

I can import it to the Project Content folder in the top level folder, or I could pick a subfolder into which to import it, like the Dogs subfolder or the Ignore subfolder. So, I'll just import it into the top level Content folder. A little further down, I have the option to Import Resources, which I'll select. Import Resources means that, if there's say, a graphic file, that was inserted into that HTML file, the graphic technically is not part of the file but it's a resource.

It's an additional piece. And, without that graphic, the HTML file won't be as clear. It won't describe whatever its subject is as clearly. So, we want to bring that graphic in. So, we'll select Import Resources, and, I'll just click Finish. It's going to process, and, on this dialogue box, over on the right hand side, I can click the Original tab to see what the original file looked like, I can click the Converted tab to see what the imported file will look like.

They both look similar, which means that it's clean. I'll click on Accept. It's going to process for a few seconds. And, when it finishes, here's the file, right here. HTML Import Test, and when I double-click on it, there it is. And Flare is aware that this file exists and knows where to find it because you imported it through Flare, rather than importing it through Windows Explorer. 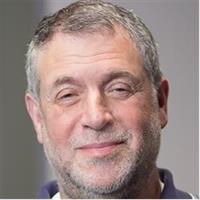 7/11/2016
MadCap Flare is a powerful authoring tool for creating technical documentation—help systems, service manuals, and more—in online and print forms like HTML5 and PDF. In this course, Neil Perlin first explores Flare's conventions and interface. He then explains how to create projects based on Flare 11's "topic model." Learn how to create projects, add content, add navigation to let users find information quickly, control the format of the material, define different outputs from a single project, and generate those outputs in any of 16 different formats.
Topics include: