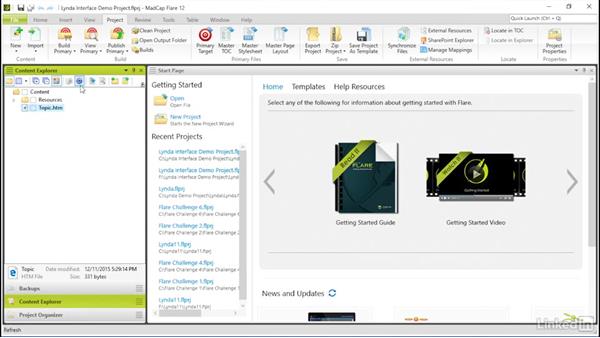 Flare’s interface is powerful and highly configurable. Learn about the default interface and how you can configure it in this video.

- [Voiceover] In this video, you'll learn about Flare's interface and how to customize it. I have a sample project up on the screen and let's take a look at the interface. First on the left hand side we see two tabs with their labels at the bottom left. They're called the Project Organizer and the Content Explorer. So the Content Explorer contains content topics, they could be graphics, and content control files, files called style sheets, for example, and various others.

The Project Organizer pane contains control files and settings that apply project-wide. Table of contents for example or glossary, something called a skin which we'll explain. In the center is the editing pane and this is where, as the name implies, you'll edit your topics and all the other files that you can create in Flare, such as style sheet files and so on. On the right, this is where right now you're seeing the Help, Flare's dynamic Help.

Many features display in the right pane for one time use, they're transitory, something like a Spell Check for example or a Search and Replace. So although you don't have to do this, what a lot of people do is they do whatever task they wanted to do using the right hand pane and when they're done, they close it. And to close it, you just click the x. And now I have more room for my editor. You'll find that there are other features that open by default as well in the left pane or the right pane.

And to see what some of these features are you can click up on the menu on View. And what you're seeing here are most of the other features and control windows that you can open in Flare. For example, if I click Backups in the common group just to the left of center, the Backups pane opens up in the left pane. Others by default will open in the right pane. Let's take a look at the start page which we're actually looking at right now. If you don't see it, what you can do is click up on the menu on View and select Start Page in the common group.

So on the left side of the Start Page, you've got quick access to basic tasks like Open an existing project or Create a new project and there's a list of your recently used projects. On the right hand side are various help resources and at the bottom right, partly buried is the News and Updates section which lists things like conferences at which MadCap will be exhibiting or presenting, information about new releases and so on.

You can display whatever you want, move whatever you want wherever you want. For example, let's say that I want to move the Content Explorer pane, I don't want it where it is. And if you look at the Content Explorer pane's title bar, you'll see that to the left of the title is a little stack of horizontal lines, that's the Drag icon. To the right we have a pull down which lists various options, there's a pushpin which I'll show you shortly, and there's the x which obviously closes it.

So let's go ahead and move the window. I'll click and hold on the little stack of horizontal lines and drag out. My window is now floating, so I can move it anywhere on the screen and if I have a dual monitors, I could actually move my Control windows onto the second screen and leave the first screen dedicated solely to content. I can also re-dock a window. And to do that what I do is I just click in the floating window's title bar, hold the mouse button down and move the mouse a little bit.

And you'll see these docking aids, these little greenish, whitish squares. Move the mouse pointer over any of those squares and you'll see a shade that shows where that window will go when you release the mouse button. So, I've just docked it back at the left hand side of the screen. You notice that the tabs look a little different. They're not at the bottom left. They're regular die-cut tabs up at the top. What I can do is click that little pull down and select say Accordion Tabs, and we're back where we started.

There might also be times when I want to get the window out of the way temporarily. I could close it, and closing it is easy, I just click the x and I can reopen it then by clicking on the View menu. But I might want to do something simpler, and there's a feature called Autohide. And if I click the pushpin, you notice how that whole left pane seems to disappear, but if you look at the left hand side of my screen, you can see the tab labels hanging there. And if I hover over any of them, that tab will pop open.

So I'll hover over Content Explorer and it stays open. You notice that the pushpin is now pointing to the left because they're pinned against the screen. They stay open until I click off the window and then they close. So if I want to go back to normal view, I'll just click the pushpin again, it's vertical, and I'm back where I started. So when you start using Flare, sooner or later, you're going to experiment with the interface and get to the point where you're deciding, this is a bad idea, I want to go back.

You could try to retrace your steps, but that's kind of inefficient. Instead, what you can do is click up on the menu, on Window, and then select this option Reset Layout at the right end of the ribbon. A message will ask for confirmation. Do you want to reset to the factory settings? You click okay and you're back where you started. So in this video, you learned about Flare's interface and how to customize it. 7/18/2016
MadCap Flare is a powerful authoring tool for creating technical documentation—help systems, service manuals, and more—in online and print forms like HTML5 and PDF. In this course, Neil Perlin first explores Flare's conventions and interface. He then explains how to create projects based on Flare 12's "topic model." Learn how to create projects, add content, add navigation to let users find information quickly, control the format of the material, define different outputs from a single project, and generate those outputs in any of 16 different formats.
Topics include: