Understanding using a host as a network firewall 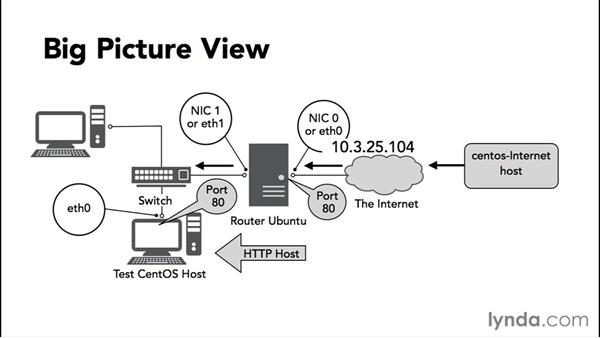 Join Jungwoo Ryoo for an in-depth discussion in this video Understanding using a host as a network firewall, part of Protecting Your Network with Open-Source Software.

For example, it's dropping all the ingress traffic or incoming traffic, and it forwards all the egress or outgoing traffic to the internet. In addition to these default rules, we need to add the following port forwarding rules. First of all, we need to open port 80 on the Ubuntu router host, and then forward all the port 80 traffic to a host running an http or web server. Here is a big picture view. As you can see, a packet arrives whose destination port is 80 from the internet at this external network interface card of our Ubuntu router host.

The network interface card has the IP address of 10.3.25.104. If we have our port forwarding rule set up, this packet will be then forwarded to the internal network interface card of the Ubuntu router host. And then, it's sent to a switch. The switch then passes it on to our CentOS host whose IP is 192.168.0.3.

And that is what we're doing on the Ubuntu router host to do the port forwarding.

1/30/2015
Network protection is vital to organizations big and small, but it doesn't have to be an expensive proposition. Learn how to protect your network with open-source tools, and do it completely FREE. Jungwoo Ryoo shows how to set up firewalls, investigate network traffic with a packet analyzer, detect threats and malicious activity with an intrusion-detection system, and enable network logging and monitoring. Start here for a low-cost route to a more secure network.
Topics include:

Network Administration IT and Hardware IT Wireshark Snort

Video: Understanding using a host as a network firewall