Working with Edge and Internet Explorer 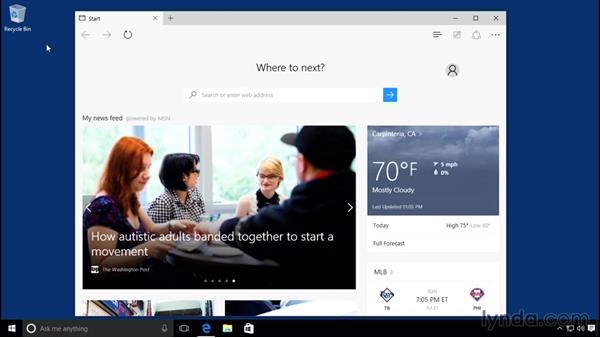 - [Voiceover] With the release of Windows 10, Microsoft is including a brand new, rebuilt web browser called Edge. So far, whenever we've used the internet in this course, I've been working in Edge. On a fresh installation of Windows, Edge is the default web browser and it will be pinned to the Taskbar, so you can launch it straight from there, so if you click on a web address and an email message, or elsewhere, Edge is the web browser that will pop up. If you don't have Edge pinned to your Taskbar, it's really easy to pin it there.

In fact, we saw how to pin applications to the Taskbar earlier in this course. You can just go to the Start Menu, go to All Apps, find the application you're looking for, right-click on it, then pin it to the Start Menu or the Taskbar. Since I already have it pinned there, I don't have the option to pin it now. Edge has a streamlined, compact interface. In many ways, it's very similar to Internet Explorer, but it's completely rebuilt, designed to run faster than Internet Explorer, and it should be much easier for Microsoft to update it in the future, to work with modern web technologies.

So you can still access Internet Explorer Version 11, which was the last version as of when Windows 10 was released. It's unlikely that Microsoft will do any future updates to Internet Explorer in the future, so, over time, it's a good idea to transition away from Internet Explorer. Of course, if you prefer to use a different web browser, like Chrome or Firefox, you can certainly install one of those. Later in this course, we'll talk about how to install new applications, so if you don't already know how to install a different web browser, we'll see that process in that later chapter.

Now that you know your options for web browsers, we'll be dedicating the rest of this chapter to getting you comfortable with working in Microsoft Edge.

7/29/2015
Note: This course covers the original Windows 10 software release from 2015. There are other LinkedIn Learning courses that focus on more recent versions of Windows 10. This course’s video “Choose the right training course” will help you find the right course for your software version.

Learn all the essential features of Windows 10. This comprehensive course covers everything you need to know to install Windows, customize it to your liking, and start working with files and applications. Author Nick Brazzi shows how to manage folders, use Cortana to search and navigate, browse the web with the new Microsoft Edge browser, and work with Mail, Calendars, and People (aka contacts).

Plus, learn about sharing via a home network, multiuser configurations, security and privacy, and troubleshooting Windows.
Topics include: