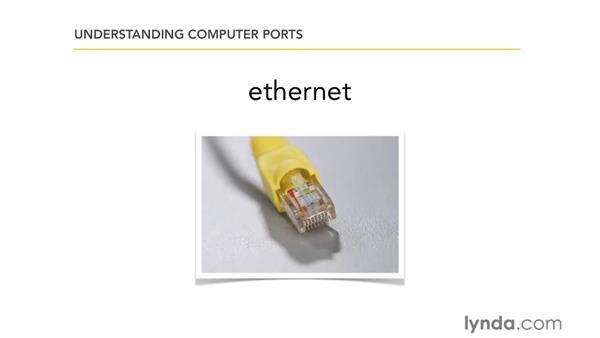 Even though you can accomplish many common tasks with your PC with just what comes in the box, meaning the computer itself, the keyboard and the mouse, you'll most likely need to attach and use peripheral devices such as printers, scanners, digital cameras, projectors, the list goes on and on. So in this chapter, we're going to look at how to set up and install common peripherals, but first in this movie I want to make sure you're familiar with the common ports on PCs into which you'll be plugging your devices. The most common port in use for peripherals right now is USB. All computers, Macs and PCs, alike have USB ports.

And as you can see they are sort of a flat rectangular port with what looks like a small plastic tab inside. And of course you plug USB cables into your USB ports. This is what the end of the USB cable that plugs into your USB port looks like. Now, the other end of the USB cable can vary in appearance. It could look like this or this or even this. The other end of the cable might even just be the device you're plugging in like a mouse or keyboard, but as long as the cable plugs into your computer's USB port, it's considered a USB cable. Now another important connector you'll find on a PC is an Ethernet port.

This is the port that lets you connect to your network or Internet service. It looks like a wide telephone jack. The cable that plugs into your Ethernet port looks like this and both ends of this cable are the same. One end goes into your computer and the other end goes into your router or modem. In an upcoming chapter, we'll talk about how to set up your computer to connect to your router or to the Internet, but for now that's how you set up the physical connection. Just plug one end of your Ethernet cable into the computer and plug the other end into your router or modem. Other ports you'll probably be using are the audio input and output jacks.

You can plug speakers into the output jack so you can hear any sounds your computer is making through them, including alert sounds or the music you're playing, and if you're recording audio, one option for doing so is to send the audio into the input jack. Now in most PCs, the audio input jack is blue and the output jack is green. You might also have a microphone input jack, which is often pink. But in almost all cases, you'll have labels on your PC telling you which is which. Lastly, all desktop PCs and many laptops have monitor connectors for connecting external monitors to your computer. Desktop PCs, which don't have built-in displays, require a monitor so you can see what you're doing.

And even the laptops do have built-in monitors, it can be nice to plug in a larger external monitors to use as your main screen when you're not traveling with your laptop. Monitors connect the laptops and desktops with either DVI connectors, which look like this, or the older VGA style connectors, which look like this. So that's a rundown of the most important ports you'll need to be familiar with in order to plug in and use peripherals with your PC.