Launching applications from the Taskbar 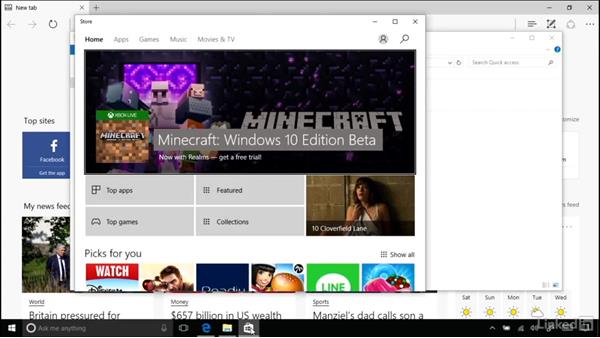 - [Voiceover] In this movie, I want to get familiar with the taskbar and launching applications. You can launch applications from either the Start menu or the taskbar, but in this movie, we're gonna focus on the taskbar. So take a look down at the bottom of your screen. This row all the way at the bottom is the taskbar, and we saw this a little bit before. This is where you'd go to access the Start menu, there's the search field for Cortana which we'll talk about later in the course. On the far right, we have this cluster of system icons. You may see the date and time.

I have the icon for the action center, for volume control, WiFi, battery, a bunch of other things. Sometimes there are icons that are part of this cluster that you will not see until you hit this little arrow icon and it opens up a menu and it shows you some more, but what I want to focus on here is this cluster of icons, kind of towards the middle. These are the applications that I have pinned to the taskbar, and I have the Windows Store, File Explorer, and the Microsoft Edge web browser.

In another movie, we'll talk about launching applications from the Start menu, which will give you access to all of the applications on your computer. So, let's finish up by looking at some settings for customizing the taskbar. First I want to close these windows. I'll just hit the X in the top right corner of each of these. I'll go back to the taskbar and instead of clicking on one of these icons, if I just point my mouse somewhere in the blank space on the taskbar, and right-click, you'll see there's an option here in this menu for Settings.

This takes us to this settings application which we saw before, but now we're focusing specifically on settings for the taskbar. One thing you might want to do is automatically hide the taskbar. I'm gonna turn that option on. So now, the taskbar goes away, but if I move my mouse all the way down to the bottom of the screen, you'll see it pops up again. This would be nice if you just want to use more of your screen space and have the taskbar go away when you're not using it. Let me turn off the automatically hide option, and there we go, it's back to normal.

You may choose this option to use small taskbar buttons, and now you see everything shrinks down really small here. You still have the same options, but they take up much less space on the screen. I'm going to turn that option off again. Another thing that you might want to do with the taskbar is to change the taskbar location on the screen. It's currently set to the bottom, but I could open up this menu, and maybe I want it over on the left side of the screen. Now it's still the same taskbar, it's just on a different part of the screen. I can still open up the start menu from here, I can launch applications and so on.

But I'm gonna switch that back to the bottom. You might want to take a look at some of the other settings here, and just sort of experiment, and see what you can adjust, but of course when you're done, you can hit the X in the top right corner to close that. The taskbar is pretty essential, not only for launching applications, but for lots of other things as well. We've already seen that you can access the action center and the Start menu from the taskbar, so clearly, we're not done with the taskbar. It's going to be an important tool as we continue learning Windows.

Video: Launching applications from the Taskbar