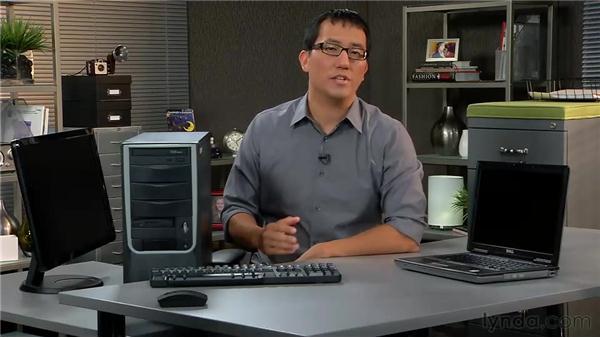 Join Garrick Chow for an in-depth discussion in this video Laptop vs. desktop computers, part of Computer Literacy for Windows 7.

When it comes time to pick out and purchase a computer, one of the first decisions you'll have to make is whether you want to get a desktop computer or a laptop computer. This is an example of a laptop computer. Laptop computers are also often called notebook computers, and these computers are designed for portability, often weighing less than six or seven pounds, and they have the monitor, keyboard, and mouse-pointing device built-in. So you usually don't have to plug-in any other accessories to use the computer. This is an example of a desktop computer. Now the term desktop can mean different things when you're talking about computers, but in this context, desktop refers to all computers that either sit on or next to your desk or workstation.

The computer itself does not have a built-in monitor, keyboard or mouse, but those items are usually included in the same box that the computer ships in and they have to be plugged into the computer when you set it up. Desktop computers are not designed to be portable or carried around a lot. But how do you decide what type of computer to get? Well, for the most part, you should only select a laptop if you genuinely need the portability. Laptops today are nearly if not just as powerful as your desktop counterparts, but you're generally be spending more money on laptops for the same amount of power you can get from a desktop computer.

Desktop computers also have the advantage of being more upgradeable. Yes, laptops have USB ports for adding external hard drives, but desktop computers also have more available USB ports and also have slots for expansion cards or for additional internal hard drives or optical drives. Desktops are usually easier to upgrade yourself too. Also, if your computer is mainly going to be used in your home or office and you don't need the portability, you can treat yourself to a much larger monitor than you would get on a laptop. Laptop displays generally top out at around 17 inches, but these days you can purchase monitors at 23, 27 or even 30 inch or larger sizes.

Of course, many laptops offer the ability to connect to additional monitors these days too, but you are still going to be paying more, so unless you really need the portability, you'll want to go with the desktop computer.