Five things that work in all applications 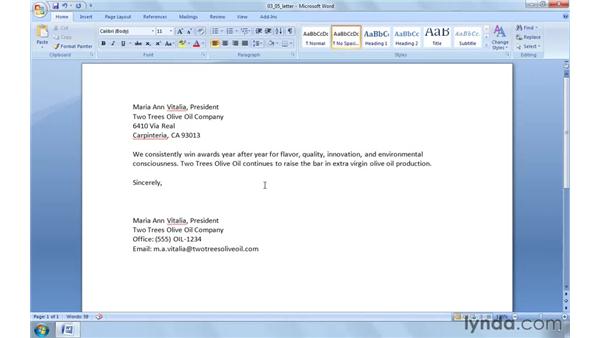 Join Garrick Chow for an in-depth discussion in this video Five things that work in all applications, part of Computer Literacy for Windows 7.

Every software application has a learning curve. Some applications are easier to use and understand than others, but what you're going to find as you become more experienced with computers and software is that nearly all applications have features or controls in common with each other. If you're novice with computers at the moment, you've probably wondered how more experienced users can just sit down and start being productive with applications they have never used before. And yes, talent and an aptitude for computers can be significant contributors, but what seasoned computer users know is that most applications have basic things in common and then they know where to look for the commands that will allow them to perform the tasks they want to accomplish.

So in this video I want to go over 5 features that appear in and work the same in nearly all applications. The first common feature is the File menu. Here are some screenshots of the File menu from several different applications. Just about every application has a File menu and usually contains commands like New, Open, Save, Close, and Print. New is for creating a new document, image, or project, depending on what app you're in. Open opens files or project that you've previously created or worked on. Save saves the file you're currently working on. Close closes the file, but usually leaves the application running.

And if the application is one you can print from, like a word processor, spreadsheet program or a photo editor, you'll always find the Print command under File as well. Notice I am showing you menus both of Windows applications and Mac applications. These common features I'm going to be showing you are not just common across applications, but also across operating systems. So if you're Mac user finding yourself working with Windows or Windows user having to use a Mac, you won't be completely lost. But there are differences to be aware of. For example, in Windows applications you'll usually also find the Exit command under the File menu, which quits the application.

On Macs though, you quit applications by clicking the application's name and then choosing Quit. That's one of the slight differences between the two operating systems, but they're always consistent with themselves. You'll always find Exit under File in Windows and you'll find Quit under applications name on Macs. That's a bit of a tangent, but the point is that the File menu is found in nearly every application and within it you'll almost always find the commands to Create, Save, Open, or Print your files. The next common feature is a group of three commands named Cut, Copy, and Paste, all found under the Edit menu. I refer to these as a single feature, because they really got hand in hand.

They're probably used most commonly an application involving typing. If you've typed some text that you'd like to copy or move to another location in your document, these are the commands you would use. Now, I'll be covering these commands more thoroughly in the chapter on word processing, but here's a quick overview. So Cut is used when you want to move text. For example, here in Microsoft Word if I want to move the second sentence of this letter and make it the opening sentence, I would select it by clicking-and-dragging through it to highlight it. Now, the default layout of Word 2007, which I'm using here, doesn't have traditional menus like File, Edit, and so on, as you can see at the top.

We don't see those types of menus. But you'll find the same commands usually found under File by clicking the Office logo here in the upper left-hand corner. So you can see we have New, Open, Save, and so on. And you'll find Cut, Copy, and Paste here under the Home tab. So I'll click Cut, but you can see it temporarily removes the selected text from my document. Again, in any other application you would choose the Edit menu and then select Cut from there. Now, I'll place my cursor at the point in the document where I want to cut text to appear. In this case, it's going to be at the beginning of this paragraph, so my cursor is flashing there and then I'll click Paste.

And my cut text reappears. Again, in any other application you would choose Edit > Paste. So that's Cut. Now, Copy on the other hand leaves the selected text to where it is, but just makes a copy of it to your computer's clipboard. The clipboard is a special section of memory your computer uses to temporarily store cut and copied text. So for example, maybe I want to create another document that begins with this contact information, so I'll just select that and this I'll choose Copy. Now, it doesn't look like anything happened, because copying doesn't alter your document in any way.

It just places a copy of your highlighted text into your computer's memory. After that you just place your cursor at another location in your document or into another document all together and choose Paste, which places a copy of that text into your document. So for example, I'll click the Office logo here and choose New to create a new document. I'll choose a new blank document. And in here I'll just click Paste. And there is a copy of the text here in this new document. So that's the Cut, Copy, and Paste feature you'll find in many applications. You'll even find Cut, Copy, and Paste in image editing applications where you can cut and copy photos or other graphics and paste them into image files.

Feature number three is another group of commands that also appear under the Edit menu of most applications. They're Undo and Redo. Whenever you make a mistake like accidentally deleting some text or making a change to you a photo or video clip that you want to take back, you're more then likely use Edit > Undo. In almost every application you'll find an Undo command, which simply takes back the last change you made to your document. Many applications even have multiple levels of undo, so you can take back the changes you made to your document in reverse order. The Undo command can also be a nice safety net in order to experiment with your file without permanently altering it.

For example, maybe you're trying out different affects on a photo you're editing. You can apply effect after effect and as long as you keep choosing Edit > Undo between attempts, you'll never do any permanent changes to your photo. Now, Redo is a little less common than Undo. Sometimes it's called Repeat. And while you'll find Undo in just about every application, fewer apps have Redo, which is a shame because they can be a very useful time saving feature. It has two main uses. First, if you chose Undo, but change your mind you can then choose Edit > Redo, which changes your document back to before you chose Undo.

In some applications Redo can also be used to take changes you've made to one item and apply the same change to other items. For example, if I selected some text in the document and changed the font, I can then select other text and choose Edit > Redo to apply that same font to the other text. So that's Undo and Redo. And again, if the application you're using has these commands, and most do, you'll them under the Edit menu. Feature number 4 is preference settings. Almost every application has an area in which you can tweak or adjust the way the application behaves. If you're using a photo editing application, you might want to change the default image format of files you've saved.

So there's a five of the most common features you'll find in nearly all applications. Knowing about these features can really help make an application you've never used before a little less daunting, because at least you'll already be familiar with and know how to use a couple of these commands.

Video: Five things that work in all applications