Essential analogies for an operating system 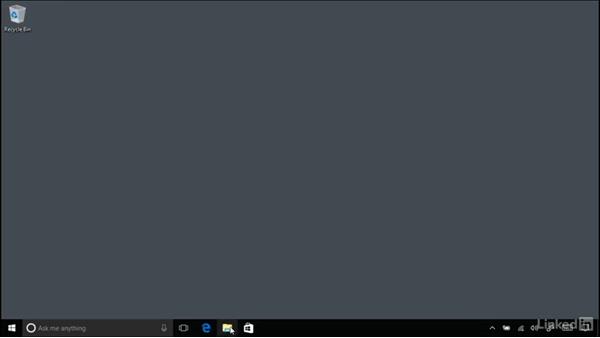 Even though we're talking about Windows 10 in this course I want to start by setting up some core analogies that will help you understand how operating systems work in general. So let's start by thinking about your computer as if it were your office and in my office the place that I usually start is at my desk. Looking at the surface of my desk, I have a few things that I always need at arms reach. My telephone, my pencil jar, my stapler and probably some documents that I know I'll be working with today. The analogy to your computer here is pretty clear.

The first thing that you see on your computer is your desktop, that's the empty screen that's underneath everything else on your computer and it's the only thing that you see when you do not have any applications or windows open. Now it's important to mention here that Windows runs on tablets and smart phones as well as on desktop computers. On phones and tablets the desktop is not your starting point, instead you'll start on the start screen. Now we're gonna talk about that as we go through this course but for the most part we'll be focusing on Windows for desktop computers.

So for now we'll talk about the desktop as the foundation and we can think of the start menu or the start screen as part of the desktop. Now you can also store files and folders on your desktop but just like your real world desktop, I recommend that you keep only a few things that you need quick access to, generally it's not a great idea to store everything you need directly on your desktop. Just like your real world desktop it's very easy for your computer's desktop to get really messy and cluttered to the point where you won't be able to find anything.

Besides there's a much better system in place to take care of all that clutter and once you make the decision to use it you can keep things very well organized. So what is the system that we use to keep our files organized? Well that's our next analogy, here in my office if I get to many files and documents sitting on my desktop, eventually I'm going to want to file away documents that I'm not using right now, so I file those things away in my filing cabinet. Every single document that's important to me can be stored in this filing cabinet and I can set up a logical order so that any of those documents can be found quickly.

Down here at the bottom of the screen we see what's called the task bar, that's this dark row all down at the bottom, and usually there are a few icons pinned to the task bar where you can go to launch certain applications. By default file explorer will be one of those icons that's pinned to the task bar, if you've removed it of course you won't see it and we'll talk about pinning things to the task bar later in this course, but by default it should be there, you can click on that, it'll open up file explorer and you can use this to navigate through your hard drive. Which again is something that we'll be talking more about later in the course.

But for now I wanna close this window so I'm gonna click on the x in the top right corner and I wanna look at another way of getting to file explorer. I can go to the start menu which is the start button down on the bottom left corner and on the far left side of the start menu there's a button here for file explorer so I can click on that and that's just another way of getting to file explorer. So from here I might go to my documents folder for example and then I could go into a folder that I've created and then I could open up a file that I have here on my hard drive.

So we'll talk more about file explorer as we go on but that's how you can access it. Now the third thing that I want to establish is the idea of running applications on your computer. For most people this is the most important part. Usually when you sit down at your computer it's because you want to use an application like the web browser or a document editor like Microsoft Word or the photo library or something like that. If you are the boss in your office then you can think of each of these applications like your employees. Now my analogy breaks down just a little bit here because all of your applications are stored somewhere inside of your computer's hard drive, in the real world you don't keep your employees in a filing cabinet, never the less, on your computer you need a way to interface with your applications, just like at your office you need to communicate with all of your employees.

So as we learn Windows we're going to talk about things like the task bar, which we've already seen, where you can launch some of your applications. So I could click on this icon here and that would launch edge which is the web browser application. As we go through the course we'll also talk about the start menu where you can launch more applications. So I can go back into the start menu here, and maybe I want to open up the weather application so I could scroll through this list of applications, I could find weather I could click on that to launch it from there.

Now if I go back into my start menu I just want you to see that there is a master list here on the left side of every application that's installed on your computer, so you can scroll through there and launch any application that you want. So now I have a few applications running and of course as we go through this course we're gonna talk about multitasking which is what you can use to switch between several applications that are currently running. We'll use stuff like the task view which is another button down here in the task bar to tile out multiple active applications so that you can choose which one you want to access.

So that's just a quick introduction to the task bar, the start menu and multitasking which also finish's off the analogies that I want you to keep in mind as we go through this course. I hope that this helps you think about the futures of Windows 10 framed as working with parts of your office. You'll get plenty of opportunity to spend some time with each of these features that we just had a glimpse of as we go through the rest of this course. But this should give you a pretty good idea of what an operating system like Windows 10 is and what the capabilities are if you did not already know.

For the rest of this chapter we'll talk about getting your Windows 10 computer set up and then in the next few chapters we'll dive deeper individually into the desktop, into file explorer and working with applications.