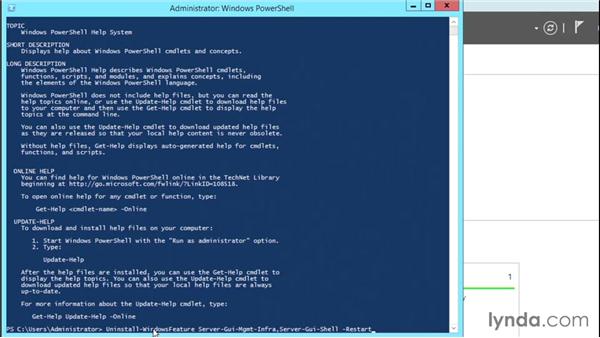 This command is referred to as a command list inside the Windows environment. This commandlet actually strings together a series of commands. The first command in this commandlet is the uninstall command. This tells the computer we are about to uninstall something. Windows feature tells the computer that the thing we are about to uninstall is a feature of Windows. Next we have a space and then we have the server GUI management interface. This is telling the computer that one of the futures we are removing is the GUI manager interface.

We also have a command here that says server GUI shell. This is telling the computer that we are also removing the server GUI shell. Restart tells the computer that we are going to restart after executing this command. So, to execute the command you press Enter. Now that the system has restarted, let's go ahead and log in. So far, everything looks just like it did originally. However, let's see what happens once we finish the log in process. This is it, this is Server Core mode.

The command we want to use is as follows. There are a couple of things I want you to notice about this. One is the command did not fit on a single line. That is okay. The command automatically scrolled down to the next line. The other thing I want to point out to you is how this command works. Previously, we were uninstalling the WindowsFeature Server GUI Management Infrastructure and Server GUI Shell. This time, instead of Uninstall, we are using the command Install. So that means we are installing the Windows features Server gui management interface and server gui shell.

We will then restart the server once that command has been executed. So let's go ahead and hit enter to execute the command and restart the server. As you can see, we are doing the same process as before, except in reverse. Once the server has rebooted, we will have our GUI interface back. 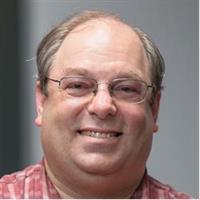 8/14/2014
Get a practical introduction to setting up Windows Server 2012. Timothy Pintello breaks down this basic IT task into its core components: installation, roles and services configuration, and local storage setup. He shows you how to practice these steps with VirtualBox and gain real experience without the cost or risks associated with expensive hardware.

Learn how to choose an edition that's right for your setup, install Windows Server 2012 and the VirtualBox drivers, and then configure the services and roles on your new server. Timothy also shows how to set up local storage and manage Windows Server in one of two ways: through the command line or with the simple admin interface that ships with Windows Server.
Topics include:

Q: Why can't I get my servers to talk to each other when I attempt to add a standalone computer virtual machine (VM) to my domain VM in VirtualBox?

A: Check the following settings if you are having this problem.