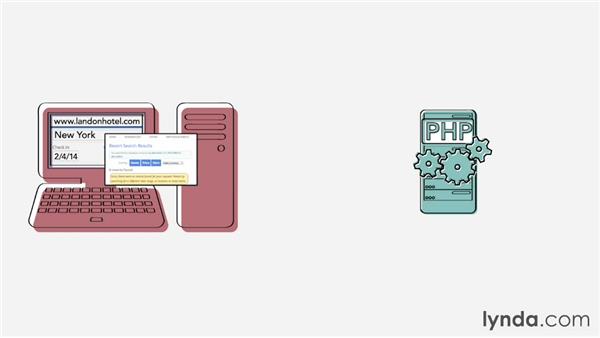 In our last chapter, we discussed front-end technology. In this one, we're gonna change our focus to exploring what happens on the server, and the types of technologies that are used to create dynamic websites. Any scripting or programming that runs on a web server is referred to as server-side scripting. This could be anything from processing a form, managing an online purchase, registering a new user, or even something like booking a hotel room. As web sites have matured, technologies that surround server-side scripting have matured as well. In the early days of the web, most server side scripting was done with what we call CGI Scripts. CGI stands for Common Gateway Interface, and it was created as a way to run scripts from programming languages like C+ or Perl on websites. Since then, a multitude of programming languages and frameworks, like PHP, Java, .NET, Cold Fusion and others have given developers a wider array of tools to choose from when they're creating dynamic sites. Although each language is slightly different, the process for utilizing server side scripting on a web page is pretty consistent. If a web page containing server side scripting is requested from a server, the web server first processes the script before the page is served to the browser. Processing the script could involve pulling information from a database, making simple calculations, or choosing which pieces of content to display on the page. Once the script has been processed, the resulting content is then returned to the browser, an then it's rendered. This process can occur from either a simple page request, through something like a user, filling out a form, or from interacting with a specific widget. Since the scripts run on the web server prior to serving the content, the scripts themselves are hidden from the end user. Now this adds a layer of security for both the data and the source code itself. There are, of course, some downsides to using server side scripting. Since the processing must be done on the server, it places the burden of running the application on the web server itself rather than the client machine. For larger applications, or sites with a lot of page requests, this can slow down the site, or force the site to upgrade to larger or even multiple servers to handle the load. The flow of dynamic pages can be frustrating for end users as well. Because the server must process the scripts, there's usually a page refresh required to display new content. This is largely the reason that client-side scripting has gained in popularity as well as the development of techniques that run server-side scripts without requiring page refreshes. To be honest, the terms client-side scripting and server-side scripting are becoming rather nebulous. Developers have become very adept at using Java Script to blend the two methods together into a seamless user experience.

If web development interests you, be sure you focus on not just the server-side software that we're going to be exploring in this chapter, but also how JavaScript is being increasingly used for more powerful client-side scripting, and as a method of controlling scripting on the server as well.

12/17/2013
You use it every day, for banking, researching, shopping, and social media, but do you really know how the web works? In this course, author James Williamson introduces the technology that makes the web run, the terminology involved, and how it all comes together to power the websites we know and love. He covers the alphabet soup of technologies involved (HTML, CSS, URL, DNS, HTTP, and IPv6), and explains what separates the front end (what we see) from the back end (what we don't) on the web. This course is your "plain English" guide to the world of domains, databases, servers, and the technology that makes the web work.
Topics include: