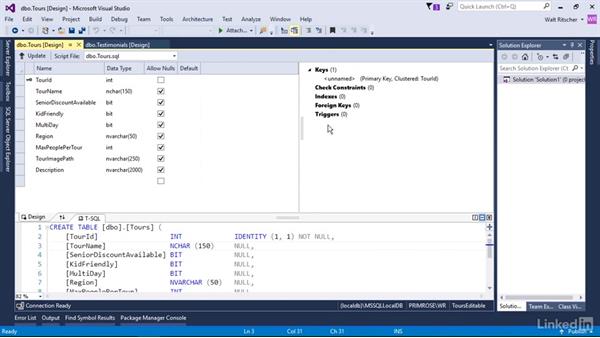 Every SQL Server database contains tables; they are fundamental organizational units of the data. Therefore, it’s not surprising that a primary feature in the SSDT is the table designer. This video tours the three parts of the table designer and shows how the keep synchronized during changes to the table structure.

- [Voiceover] Every sequel server database contains tables. They are fundamental organizational units of the data. Therefore, it's not surprising that a primary feature in the sequel server data tools is a table designer. You get to the table designer by going to "sequel server optic explorer," opening up one of your databases, looking in the Tables folder, and then double-click on the table name. Another way to see the designer is to right-click on a table, and choose "New Designer." There are three distinct areas of the designer. In the upper left is the grid view, on the bottom is the script view, and over on the right side is the related item section.

The grid view is the graphical representation of the table structure. The script view is the area that shows the transact sequel code for the table structure. Transact sequel, also known as "T sequel," is Microsoft's version of the structured query language, SQL specification. The script window uses a subset of T sequel called data definition language, also known as DDL, to define the structure of the item, in this case, the table. The third area of the designer is this area. Think of it as the related items to this table, or another name could be "child items." This is where you can view things like table indexes, different kinds of keys.

For instance, primary keys would go up here, foreign keys go in this section. There's also a section for looking at triggers, and check constraints. Some of the parts of the designer are synchronized, so if I change a value here in the grid view, look what happens when I move to a different row in the grid view, you'll see in the bottom screen, in the script view, that there's a highlight on line six. I want to choose "TourName," the highlight moves to line three. Now the opposite is not true. If I come down here and highlight line six, you see that it doesn't select "Multiday" up here in the grid view.

There's another synchronization, when I make an edit. If I change this field, here, to "MultiDay Trip," and move to a new row, watch what happens here on line six, it changes. And the opposite is true when I change this value. You'll see that in this area there's a message that pops up that says, "Processing T sequel changes." Every time I make a change down here, you'll see that "processing" message. And eventually, it'll update the grid view. So, now you see it's back to "MultiDay" value here. I'll close this designer, and I'll discard the changes.

Coming up next, I'll show you how to modify a table field in the designer. 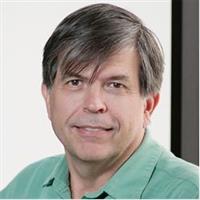