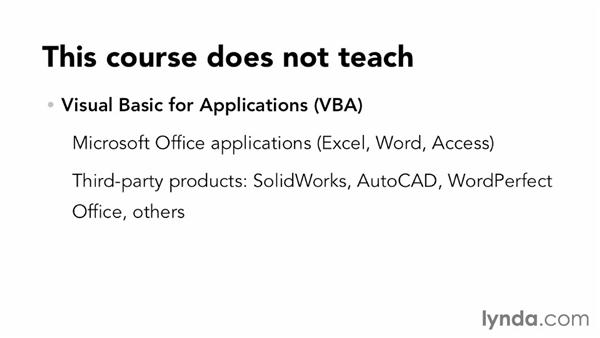 For example, you can build desk applications with the Windows forms or Windows presentation foundation frameworks. You can build Windows store apps for Windows 8 and Windows RT, Windows phone apps, web applications with ASP.NET and web-based services with Windows communication foundation. All of these platforms support this version of Visual Basic. There are number of programming languages that are related to this version of Visual Basic that this course does not teach.

And this course does not deal with this older version of the language. The course also doesn't try to teach Visual Basic for applications. This is a modified version of the language that's used in Microsoft Office applications, and by some third party software vendors. And finally, there's a language called VB Script. It's an interpretive language similar to JavaScript in purpose. What was supported in older versions of Internet Explorer. This course is only about Visual Basic .Net through Visual Basic 2012.

The target audience for this course includes developers who are brand new to Visual Basic. And developers who've been using Visual Basic, but want to look up or clarify a language feature. The course is designed for those who are brand new to programming. You don't have to know any software development terminology. And along the way, I'll answer a lot of common questions. Such as, what is a programming statement, and what does it look like in Visual Basic? What's the difference between a variable, a field, and a property? What's a method or procedure? And why do we use those two terms interchangeably in Visual Basic? And what's the difference between a subroutine and a function? I'll clarify all of these terms along the way and show you how they're implemented in this language.

If you're brand new to programming though, I recommend that you also watch this course, Foundations of Programming: Fundamentals. This course in the Lynda.com library will help you understand most of the vocabulary that software developers use frequently. And also, Visual Basic 2012 is an object-oriented language. It runs on object-oriented platforms, including the .Net framework and the Windows run time. To learn more about object-oriented programming terminology, watch the course Foundations of Programming: Object-Oriented Design. Between these foundations courses and this course to help you get started with Visual Basic.

You should then be able to jump into one of the platforms or frameworks that help you build applications with this programming language.