Behind the scenes 4: Shooting B-roll and gathering assets 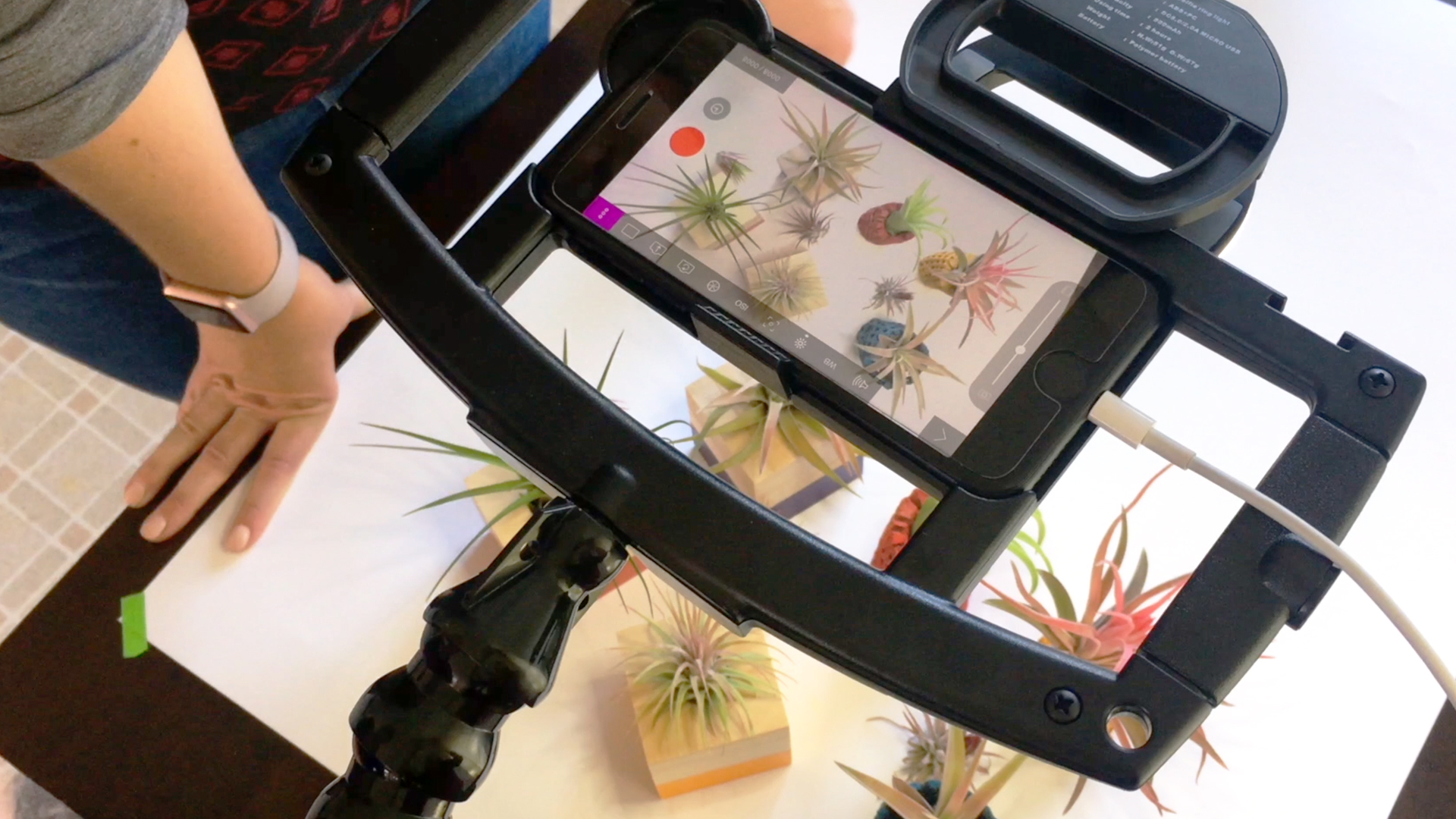 - Lolita has now recorded her delivered script which serves as the foundation for her video. Now it's time to get all of that engaging B-roll and other assets that she has outlined in her shot list which will add plenty of visual interest and important information to this promo. So let's go back to Lolita's two-column script to see what we need to capture. As you can see, we've got several different varieties of shots. First, there's just the general B-roll of Lolita's different products. Second, there's a category of shots that involves capturing Lolita in action, whether it's caring for the air plants, painting her pots, or taking photos, each of these involves Lolita actually in the shot.

And finally, there are the assets that we need to gather, like photos and screen capture from Lolita's website and personal collection, as well as some stock music options. So first of all, the product shots. Here's a basic list of the shots in that category that Lolita wants. And so I suggest to her that she get the basic shots first and that means just the standard, tripod-mounted, frame-lock shots. I taught her how to properly set her exposure and focus with each and every camera setup.

To do that, we worked exclusively with the app Filmic Pro so that she wouldn't be subject to the drifting focus and exposure of the standard iPhone camera. She got basic wide shots, medium shots and closeups. She also got some handheld shots, but this was just covering our bases to get the material that she wanted. Then we captured shots with camera movement and lens movement. I taught her that when she performs pans or tilts, that she needs to be very deliberate in her actions, starting and ending the movements with specific points and smoothly moving between them.

I also showed her how to perform creative rack focuses which shifted focus from one plane to another. After we got all of that, we really began to get creative and shot some specialty shots like slow motion and stop motion, which required the most amount of setup. For the slow motion, we shot at 240 frames per second, which allowed us to capture our camera movements and the movements of objects within the video frame in ultra-smooth, ultra-slow motion. Then we also staged a dynamic stop motion setup which was really cool.

We mounted the camera pointing down toward an evenly-lit white sheet on a table, and then we placed her air plants at random intervals within the video frame. Then we used an app called Stop Motion Studio to capture and then move and then recapture the objects in the frame, over and over again. Stop Motion Studio uses a technique called onion skinning where it allows us to look at where the objects were placed in the previous frame and this let us reposition the objects with maximum awareness of what came before.

We repositioned the objects about 30 different times, until we created a fun, stop motion movie, which Lalita wanted to use to open and close the video in a fun, energetic way. We then captured Lalita in action in a number of the shots. This included shooting Lolita performing actions like caring for her air plants and taking photographs and painting her wood pots. And while she could have gotten these herself with some proper planning and staging with our trusty tripods and other stabilization equipment, these type of shots are usually best captured by someone else, so I helped her out by operating the camera and directing her when necessary.

I just mention this because even if you are one-man banding your video production, don't be afraid to ask a friend or a colleague for help. Of course, if your collaborator has no prior production experience, you'll just need to teach them the basics, communicate what you want and ensure you get what you need. Also within this category of shots, we did some more fancy camera work in the form of timelapse. Lolita wanted to match the fun, whimsical motion of the stop motion that we created before in a similar sort of energy with timelapse, so I filmed her for about two minutes taping and painting her pot, capturing a frame every five seconds.

This resulted in a jerky, but enjoyable progression of the action. So that was pretty much it in terms of B-roll. We also went through photos from Lolita's own personal collection. Thankfully, she's a professional photographer, so she was able to provide a lot of really great options. And we also went to her website and used a free screen cap software to capture several seconds from her Etsy site. One final asset that we needed to gather was stock music, which admittedly, takes a lot of work.

Finding the perfect selection of stock music can really be a chore, but once you find something that works, everything really starts clicking into place. Granted, at this stage, we were really just searching for possible options. It's later, during post-production that we'll begin slotting in the various tracks to the edit to see what works best. There are various stock music sites that you can use, and there are various rules pertaining to music copyright and usage rights that you should know about. My course, Introduction to Music in Film and Video covers all you need to know.

But for now, I'll just say that we used the stock music site Pond5, which is a royalty-free music site that allows you to purchase music tracks and use them in any project you like. So Lolita and I searched through a lot of stock music, using keywords like happy, uplifting, fun and vibrant, which is the vibe that she was going for. After quite a bit of searching, we came up with a selection of about seven songs that we'll try out. So there we have it. In a little over four hours, we captured and gathered all the media we needed for this video, and most of it went according to the script and shot list that we drew out, with of course, some improvisation along the way as we discovered new things to try.

Now it's time to put everything together, which is what we'll look at in the next chapter.

10/23/2017
Making Video: Sell Something is a beginner-level project-based course for non-video people who want to make a short video to sell a product. Staff author caters to learners with minimal pre-existing knowledge, limited resources, and almost no budget. She shows that—with the right techniques—making an engaging promotional video can be accomplished with little more than a smartphone. The course is presented in a workshop style where Ashley teaches a real-world professional (a woodworker) how to make a video for her website. Like the rest of Making Video series, this course focuses on (a) planning a video project with an eye for success, (b) shooting the best possible video using very basic equipment, and (c) editing video with intention and finesse using free editing software. This installment also includes an overview of sales tactics as they apply to video, and tips for showcasing a product in the best light. Following the same steps, you should be able to create engaging videos to sell your own products and services.
Topics include:

Video: Behind the scenes 4: Shooting B-roll and gathering assets