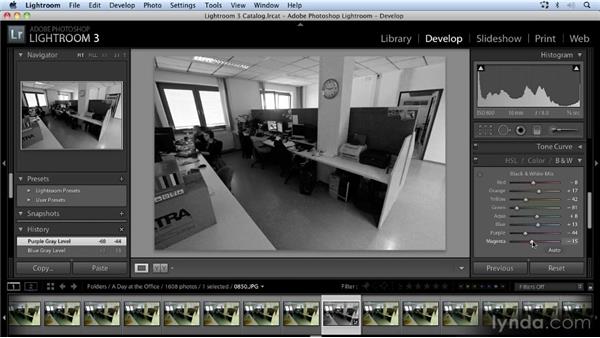 Join Tim Grey for an in-depth discussion in this video Making batch adjustments with Lightroom, part of Time-Lapse Photography Workshop.

I've imported into Lightroom the images from My Day at the Office time-lapse project, which were captured over the course of about an 8 hour day, at an interval of 20 seconds between each frame. But I notice right off the bat that things could use a little bit of an improvement here between each frame, the images don't quite have the right color. I'd like to apply some adjustments. Of course, with over 1600 images in this time-lapse project, I certainly don't want to apply the adjustments individually to each image. And so, I'm going to apply the adjustments to all images using one as the baseline and then synchronizing those adjustments to all of the images here. With this particular time-lapse, the light changed quite a bit over time. You can see there are windows in the background.

And as the light changes throughout the day, both in terms of intensity and color temperature, that causes some variability within the scene. So I don't want to start with the first image and I don't want to start with the last image. The first image is a little brighter than the rest. The last image is a little darker than the rest. So I'm going to choose an image somewhere in the middle. I'll use the Filmstrip and just scroll about halfway across the Filmstrip to find a representative image from somewhere around the middle. I'm then going to switch to the Develop Module and I'll apply some adjustments to optimize this image.

I think the color temperature's a bit off, so I'm going to shift the Temperature over toward blue just a little bit to get rid of some of the excess yellow. And I also think that it's a little bit green, that's probably owing to the fluorescent lights. So I'll move the Tint slider over to the right, a little bit toward magenta in order to compensate for that green. I can also apply some other adjustments, for example, Tonality. I think overall the tonality is good. I might apply a little bit of a Fill Light adjustment just to brighten up some of those darker shadow areas. I don't think I need any more Contrast, the scene is already a little bit contrasty.

I do think I'll increase the Clarity value. Now, you know, clarity will give me something of a sharpening effect. I sort of think of it as a haze reducer. And here, it's going to help to tone down the, what appears to be haze in the background. Because of that back lighting, we get a little bit of a hazy appearance and increasing clarity a little bit will improve that. I also think the colors could use a little bit of a kick so I'm going to bring up the vibrance, not too much of course. I don't want things to look artificial. And actually, now that I think about it, I'm contemplating maybe converting this into a black and white.

Because, the color is a little bit problematic to me, it's, it's not that it's incorrect necessarily, it's just not that pleasing. And so, I think perhaps a black and white interpretation might actually solve that, and perhaps might even make the over all time-lapse look a little bit more interesting. And getting a sense of that, just by reducing the saturation slider all the way, I think this might be a good improvement for these images. So I'll take Saturation back where it was, and I'm going to choose the B&W for black and white section here of adjustments.

And basically, just going through each of these sliders and trying to find the best position to produce a good overall effect. This does cause a little bit darker appearance in the background than I might like. I'm going to try increasing the Fill Light just a little bit more. Yeah, that looks like it's a, a good adjustment there. And I might even just increase overall brightness just a little bit. That looks to be a good improvement, although, I am seeing a little bit of noise and that's probably just a matter of having brightened some of the areas of the image that contain some noise in the first place.

So I'll take a look at the yellows and that is certainly affecting some of the cardboard, maybe the aquas and blues. And we just need to take a look at each of these channels, each of these color ranges and see which one is most problematic. And there we have it. The greens for the floor are certainly a little bit problematic. If I brighten those up, that noise goes away. And as far as that cardboard, I'm guessing that the oranges are probably mostly to blame and if I keep that a little darker, that'll certainly help. And now that I've brightened the rest of the scene, I think that actually works out just fine. And since, there obviously is a little bit of noise in the image, I'm going to go to my Detail section and I'll actually apply a little bit of noise reduction. I think in this case, it's mostly luminance noise reduction. I'm going to reduce my Histogram Display and scroll up a little bit so that we can see the preview.

And as I increase Luminance, you'll see that the image starts to look a little bit soft. As I decrease Luminance, you'll see that the noise shows up again. And I want to use just enough of a Luminance Noise Reduction to have a good effect on the image. If you take it too far, things will get softened up fairly significantly. I'll go ahead and reduce the Detail setting here just a little bit, and that looks to be a pretty good effect. I don't need to worry about color noise at this point, even though there may have been some color noise in the original, since I have converted the image to black and white and that obviously won't be a concern.

So that looks to be a reasonably good adjustment. Obviously, some of these background areas are a little bit dark, but that's just the nature of this scene. Several of the overhead lights were turned off so that the folks working at the computers would be able to work a little bit more effectively. Ad so, it's simply dark in that corner. I'm not going to worry about that too much, but now that I have an adjustment that I"m happy with for this image, I can apply this adjustment to all of the images in this particular shoot. So, I'll go into the Edit menu and choose Select All. And now, all of the images are selected with the image that I was working on being the actively selected image.

So now, I can click the Sync button at the bottom of the right panel in the Develop Module. And this will bring up the Synchronized Settings dialog. In this dialog, I can choose which specific adjustments I would like to apply to all of these images. You'll notice that the only options that are turned off are those that you might want to apply individually. Localized adjustments, in other words, adjustments effecting specific areas of an image, transform, and profile corrections, as well spot removal, and cropping. So, in this case, the default settings are perfectly fine.

It's essentially applying all of the adjustments that optimize or change the appearance of the image. So, I'll go ahead and click the Synchronize button, and Lightroom will process all of these images. And in just a moment, we'll see that all of the images have been effectively converted to a black and white interpretation. As you can see, Lightroom makes it very easy to apply adjustments to one image. But then, apply the exact same effect to a large number of images which is particularly helpful for time-lapse photography.