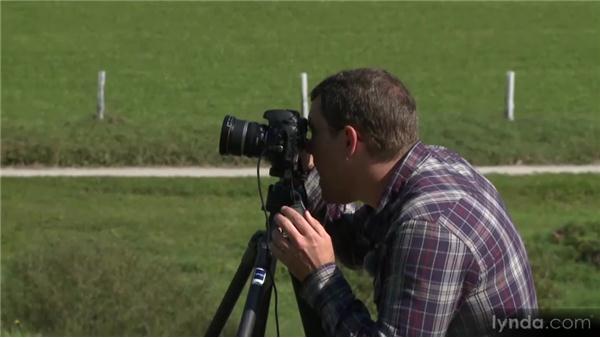 Join Tim Grey for an in-depth discussion in this video Capturing the time-lapse frames, part of Time-Lapse Photography Workshop.

Time-lapse photography obviously requires a subject that is moving or changing in some way, so that over time we can record that change and render that in the final video. I was driving through the mountains here hoping to find maybe some interesting clouds or animals. And I've certainly found some good animals. I've got some cows here in the background. They're taking a bit of a break right now. They were grazing for a little while and even coming close to check us out a little bit. But hopefully over the course of my time lapse they'll start moving around a little bit more. That's the idea here. But besides the cows I actually got really lucky in this case. I've got a beautiful backdrop, these mountains in the background. And also some nice clouds that are starting to develop. Now, clouds of course are a little bit cliche as a time lapse subject but I think that's largely because they're so interesting.

Everybody who shoots time-lapse probably is going to shoot clouds at one time or another, but it usually is quite nice. I actually like the result quite a bit. And so here, I've got the best of both worlds. I've got some cows in the foreground, a beautiful backdrop with these mountains, and the clouds up above. So, I'm going to try and capture an interesting scene that incorporates all of that. I need to think, of course, about my camera setup. I want to make sure I'm using a very stable platform. I've set up my tripod here. I already have my backpack hanging from the center post, so that gives me a very stable platform for the camera.

I'm using a wide-angle lens here. I'm hoping, that over the course of capturing the time lapse here, I'll get some cows coming closer to the camera, which will help add some interest. But in the meantime, I want to take in a relatively wide field of view. So, I'm using a 10 to 22 millimeter lens set to 22 millimeters. I'll go ahead and make sure that the framing is just the way I'd like it here. There's a road over to the side that I want to exclude. But I'm mostly interested again in this little meadow with the cows. And of course, the great clouds in the background.

I'll also set my focus and that looks to be pretty good. So, I'll lock everything down on the tripod nice and tight. And that gives me a good starting point. In terms of the exposure, its pretty bright I'm going to use a 100 ISO setting because that will obviously be the best choice here. It's very bright lighting. I don't need to worry about increasing ISO to get a faster shutter speed. So, 100 is going to help insure minimal noise. I do want to have a reasonably large depth of field, but shooting from this distance wide-angle lens, F8 is going to be more than adequate.

I also want to make sure that I'm not going to get clouds blown down. Now, over time my hope is that there will be more clouds. I already have a pretty good degree of clouds here in the background. They're getting started pretty well. I'm anticipating more, as the clouds are being built up. The, the wind flowing into the mountains and going up is going to cause more and more build up of those clouds. As that happens, obviously the clouds are relatively bright. They're reflecting a lot of sunlight. And so, with more clouds there's a risk of having blown out highlights. And so, as I adjust my exposure, again at F8 a proper exposure, so to speak, would be around two-fiftieth or so of a second.

I'm going to set my exposure to about a minus half stop. So, I'm going to use a five hundredth of a second shutter speed in this case. The only drawback really with that fast shutter speed is that, as the cows are moving, we won't see any blurring of that motion. They'll be very sharp. That does cause the final video to be a little bit herky jerky but I think in this case that's going to be the best overall compromise. In terms of that interval, the cows are obviously or hopefully, anyway, are going to be a moving subject. I'm anticipating that over the course of recording here, they'll be moving about the field quite a lot. And so, normally I would be shooting with an interval of about one second, capturing a frame every single second.

But with clouds, they're not moving very fast. In fact, standing here, it doesn't look like they're moving at all. And that means, I need a longer interval, perhaps just a couple of seconds, or even as long as 5 seconds would be something I typically would use for clouds. So, I have a little bit of a dilemma here. I have 2 possibilities. One second might be ideal for the cows. Five seconds is probably closer to ideal for the clouds. I'm going to meet it somewhere in between. I think I'm going to go with the two-second interval. That'll still work pretty well for the cows in the foreground. It might cause them to jump around a little bit more, especially as they're moving more quickly.

But I think it's going to work a lot better for those clouds. And that means, that every minute I'll be capturing 30 frames. So, each minute in real life will translate into one second in the final video based on an assumption of 30 frames per second in that video. So, I'm going to set my intervalometer to two-second interval and then I will set that down. It's ready to go. I also want to think about the white balance, of course. And so, I'm going to use a cloudy setting. I'm of course photographing clouds. But overall, the sky is pretty bright blue.

But that cloud setting is going to give me a nice, warm tone in the images. I could always make some adjustments later but I think that is going to produce the best color overall. So, again, 100 ISO, F8, five hundredth of a second. That's slightly underexposed at the moment, but that's going to help make sure those clouds don't get blown out. And of course using a manual exposure. I've also taped my lens down so that I make sure that the zoom setting and the focus is not going to change at all during the capture. So, with all of that taken care of, I'm ready to start my time lapse capture. I'll go ahead and press the start/stop button and the capture begins. And so, now, I just need to make sure that this camera set up remains relatively safe.

So that it doesn't get disturbed, cars passing, people going by and even the cows, making sure that they don't get too close. But I think that this is actually going to be a pretty interesting time lapse, blending some relatively fast moving subjects, the cows here, and a relatively slow moving subject, with the clouds in the sky above. A beautiful scene, and I think it's going to produce a very nice time lapse.