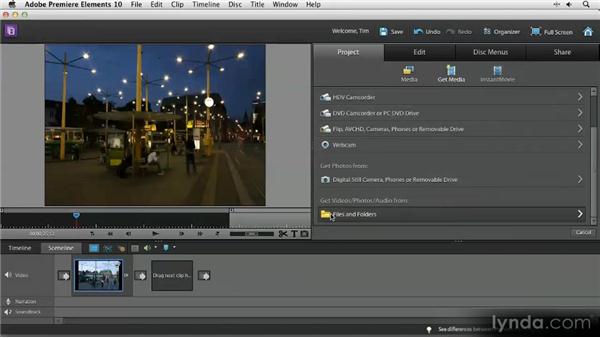 Join Tim Grey for an in-depth discussion in this video Assembling a polished video, part of Time-Lapse Photography Workshop.

I've used Lightroom to organize and process my images for the time lapse project of trains and buses and people in a town square. And so, I'm ready to assemble that into a final video. For this project, I'm going to use Adobe Premier Elements to assemble the time lapse. And also, to apply a few finishing touches to make a more interesting final video. I'll go ahead and switch to Premier Elements, and then choose File > New > Project from the menu, in order to create a new project.

And I have my preset established as the NTSEDV a standard digital video preset that work just fine for this project. I'll go ahead and click the OK button in order to create that video project. Next, I'm going to click the Get Media button on the Project tab, and then scroll down to the bottom of the list and choose Files and Folders. This will bring up a dialog where I can choose which images I want to import into this project in Premiere Elements. I exported the images from Lightroom into a folder on my desktop called TL Exports, so I can choose that folder. I don't need to choose the individual images.

I can simply choose the folder and click import, and all of the images in that folder with be imported into this project in Premier Elements. At the end of that input process, I receive a message here. You can see, there is a system file located in that folder that Premiere Elements recognizes as not being an appropriate media file, and so it failed to input that, that's no problem at all. It's not an image in Timeline. So, I'll simply click OK to dismiss that message.

I can now double-click on my TL Exports folder. And then, click on the first image and simply press Cmd+A on Macintosh or Ctrl+A on Windows, in order to select all of the images in that folder. With all the images selected, I can simply click on of the thumbnails and drag down to my seam line and drop the images into the available box there. I get the option as to whether I want individual stills or a grouped slideshow. I most certainly want a grouped slideshow.

It makes it much easier to manage, and in the case of a time lapse video, there's no need, whatsoever to work with the individual frames within Premier Elements. So, I'll chose that option. And then, you can see that the Create Slideshow dialog appears. The main thing I need to do here is make sure that the image duration option is set to 1 frame. Each of the frames that I captured in the field, I want to be used as a single frame in the video that will be assembled. So, I'll go ahead and click OK to accept those settings.

And then, you can see that my basic video has been assembled for me. You can see from the initial preview that I have black bars at the bottom and the top of the frame. That's only to the fact that the pixels in a JPEG image are square where as in video, they are generally rectangular in shape. But we can make up for that by choosing File > Interpret Footage from the menu. And then, in the pixel aspect ratios section of the interpret footage dialog, we can choose Conform to. And then, on the pop up, use the appropriate setting based on the video preset we used for this project.

That happened to be DVNTSE, the standard digital video setting. So, I'll choose that option, and then click OK. You can see that the image now fills the frame for our time-lapse video, and we can take a quick look at the result by clicking the Play button underneath the Preview, to get a sense of what that video will look like. Keep in mind, however, that in this preview, you're likely to see a bit of a jittery image and the quality may not be very good, and that's because the video has not yet actually been rendered. But I can tell, just from this preview that the time lapse is coming together very, very nicely.

I think what I would like to add, though, is some music to make things just a little bit more interesting. I'll go ahead and pause my playback, and then I'll go to my Project tab and move up one folder level, so that I can see the folder, rather than all the images. And I'll choose Get Media. I'll go ahead and select the Files and Folders option. I have on my Desktop a folder with some music in it. And in this particular case, I am going to choose a song called fast or does it by Kevin McCloud. I'll go ahead and click the Import button after choosing that audio file. And that audio file, that music will be imported into my project. I can then, drag that audio file down onto my seam line. In this case setting it onto the soundtrack, I'll go ahead and drop the sound file there.

And you'll notice, based on the preview, that the song is a bit longer than the video. I'll switch to the Timeline View and we can make sure that everything aligns just perfectly here. I'll go ahead and scroll down, so that we can see the soundtrack. And in this case, it'll actually a little bit easier if I move this up to the first audio track, rather than the soundtrack, so that I can see both the video and the audio at the same time. And then, I can simply drag from the right side to adjust the size of the audio clip, so that it matches the length of the video.

I'd also like to have the audio fade in from the beginning of the video and fade out at the end, so it produces a little bit smoother experience for the viewer. So, I'll go to the Edit tab, and then under Effects, I will click the Edit Effects button at the bottom. And I'll expand the list for volume. And then, simply click the fade in button to add a fade at the beginning, and the fade out button to add a fade at the end. Then I'll go ahead and click the Done button to complete the effect. And at this point, I can click the Play button.

And when the audio starts, you'll notice that it starts quiet and then builds up over a short period of time. (music playing) and we'll get the same effect at the end of the video as well. It will fade out at the end. I'll go ahead and scrub the slider over to the right. And then, near the end, I'll go ahead and click the Play button. (music playing) And you notice that the audio, once again fades off at the end of the video.

So, at this point, I think I have a nice video set to music. I'll go ahead and click the Share tab, and then click the Computer option. Scrolling down on the list of presets, I will choose the QuickTime options, since I am working on a Mac at the moment. And I will click the Browse button and navigate to the location where I'm saving this video project and click choose. And I'll also give this video a name. I'll just call it Plaza in this case.

And then, I'll click Save. And Premier Elements will set about the task of rendering that video, including both the video and the music all in one encapsulated video. Once the video has finished rendering, I'll go ahead and click the Done button. And then, I'll click the Save button, also to save my project. Making sure that all the changes that I've applied to this project will be preserved as part of the project. I could then always come back later and make adjustments, for example, changing the music or making other refinements to my video.

And with the file saved, I'll go ahead and minimize Premiere Elements. And then, on the Desktop, I can go to the Plaza folder and that's where the Plaza movie file has been saved. I can simply double-click to open that video.